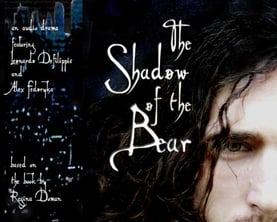 Happy hugs to Catholic author and friend of CatholicMom.com Regina Doman for the great news that her audio Drama based upon her amazing book The Shadow Of The Bear

has won a big award! The following press release shares all of the details.

The Shadow of the Bear Audio Drama Wins 2009 Uni Award from the Sonic Society
Press release from Chesterton Press.

MP3 of Award Presentation:  http://traffic.libsyn.com/sonic/SSociety158.mp3 (Shadow begins at about 22 minutes into the show.)

Based on the book by Regina Doman, The Shadow of the Bear audio drama has won the Sonic Society’s 2009 Uni Award for Best Audio Drama Show.


The Sonic Society (www.sonicsociety.org) is a Broadcast/Podcast out of Halifax, Nova Scotia Canada. It
showcases the very best of Modern Audio Drama from around the world.  On their show during November
2008 the Sonic Society featured the entire 4-hour audio drama of The Shadow of the Bear, produced by Andrew Schmiedicke and written and directed by Regina Doman of Chesterton Productions
(www.chestertonproductions.com).

At the end of May 2009, the Sonic Society invited its 50,000 listeners world wide to nominate their favorite
show for its 2nd Annual Uni Awards.  The finalists in seven different categories were chosen by popular vote
and announced on the Sonic Society’s blog on June 9. The listeners then voted on the finalists.  After all the
votes were in, Jack Ward of the Sonic Society said, "The Shadow of the Bear won by a clear majority the
"Best Audio Drama Show".

"So many people helped to make this happen," said Andrew.

Joe Miller donated the production studio and sound equipment.  Most of the cast came from Christendom
College, Front Royal, Virginia; but there were also some from Canada, and Leonardo de Felipis of St. Luke
Productions (www.stlukeproductions.com) played both the villain and the victim in the show.  The band
Scythian (www.scythianmusic.com) gave permission for their performance of the "Drums of Belfast" to be
used as the opening and closing music for the drama, and Johnny Doman (www.johnnydoman.com) wrote and performed most of the music used within the drama.

Ken Fast of Northern Rain Studio in Canada (www.northernrainstudio.com) handled all the post-production.
After receiving the digitized recordings of the actors and actresses, Ken and his team edited and mixed the
performance with music and sound effects.  "I think it’s a great example of how we can all work together no
matter where we are," Ken said.  "Through the power of the internet we can transfer it, and way up here in
Alberta, we can do the sound track."

And the result of this cooperative work is fantastic.  Not only did The Shadow of the Bear win the "Best Audio Drama Show", it was also a finalist in 4 other categories:

The Shadow of the Bear is about a mysterious young man, who lands on Blanche and Rose Brier's doorstep in New York City. The two sisters have conflicting opinions on whether or not he is dangerous. Even as Blanche learns to trust him, her fears that Bear's friendship threatens their family prove terrifyingly true. A modern retelling of the classic Brothers Grimm fairytale, "Snow White and Rose Red".  For more information about this story and its sequels, visit www.FairyTaleNovels.com.