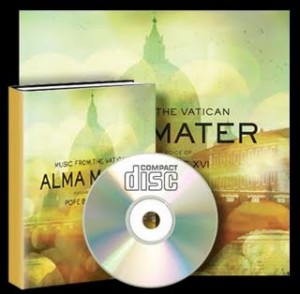 This month, you and your families will have something new to upload onto your MP3 players:  Alma Mater: Featuring The Voice of Pope Benedict XVI

Scheduled to be released on November 29, this new music album in honor of Our Lady from Pope Benedict XVI will feature His Holiness singing litanies and chants.  He will also recite passages and prayers in five languages:  Latin, Italian, Portuguese, French, and German.  The Pope's recordings were from his Masses, prayers, and speeches he made on trips abroad.   It's the first time Pope Benedict will be heard on an album, and this spiritually uplifting collection of music would make a wonderful Christmas present.

But did you know that he isn't the first Pope to release an album?  Pope John Paul II released two successful albums, one in 1982 and one in 1994.

Also on the album:  one song by the Pope and eight beautiful tracks of modern classical music (with the Royal Philharmonic Orchestra).  He will be backed up vocally by The Choir of the Philharmonic Academy of Rome.

His Holiness has loved classical music all his life, especially Mozart. The album is a response to the Pope's concern that the Church needs to  recover the sacred place that music has in Mass.  We have such a need for music that inspires people and glorifies God.  He is said to have a beautiful singing voice, very soothing.

"The Pope has almost a lullaby tone to the way he sings," said Colin Barlow, president of Geffen UK, who said that the Pope is extremely pleased with the album so far.

Pope Benedict XVI brings together the talents of both Christians and non-Christian composers (Simon Bosewell from Britain, Stefano Mainetti of Italy, and Nour Eddine of Morocco), representing unity in mankind.

Alma Mater is Latin for "Nourishing Mother."  How fitting, since a portion of the sale proceeds will go to charity to help provide musical education to poor children around the world!

More information can be found at www.musicfromthevatican.com.

If you would like to hear some of the music, visit http://www.youtube.com/watch?v=mtfqFMnd9GY