Daniel Smrokowski joins us today as a new member of the family of contributors hear at CatholicMom.com.  I recently had the pleasure of meeting Daniel in person and am continually amazed by his commitment to his faith and to Catholic New Media.  I'm so glad that Daniel is able to share his writing her on CatholicMom.com!  Visit him at http://www.dansmrokowski.com/ and subscribe to his wonderful Special Chronicles podcast at http://specialchronicles.com.

As they waited for the concert to begin, members of the visiting Catholic "acoustic humor rock band" known as Popple made finishing touches—tweaking the sound system and fine-tuning their instruments. Finally, at about 8 p.m., the band approached the stage and the guitars, ukulele and kazoos piped up. And the crowd shouted, clapped and sang along. 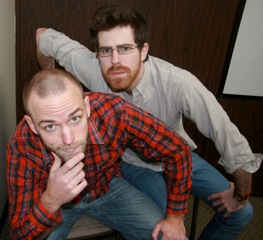 This marked the beginning of the hour and a half concert Saturday, March 13, at St. John Neumann Catholic Church, at 2900 E. Main St., St. Charles, Ill.

About 250 people, ranging from three weeks old to at least age 70, flocked to the church to hear the Popple concert from 8 to 9:30 p.m.

According to Joe Weyers, Middle School Youth Minister at St. John, the Popple concert was publicized to the entire parish and other churches in the community.  The concert was sponsored and promoted by the middle school leadership team called SHOUTeam, which stands for Spiritual Holy Outgoing Youths Together.

Saturday’s venue was a usual one for Popple, according to Kyle Heimann, Popple’s guitarist, ukuleler and self-described kazooateer.

And according to Dan Harms, Popple’s guitarist, their music and their band is their ministry.

"We’re not just limited to playing music," Harms said. "A lot of times we’ll give keynote talks and travel around and give workshops and different talks to youth groups and diocesan groups. But primarily the basics of it is music and that was kind of the catalyst for us to get into our full-time ministry of Popple." 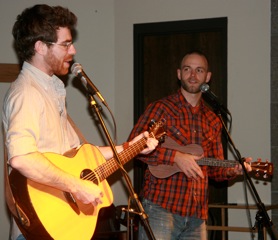 According to Heimann, mixed in with their music and performance is "a combination of serious stuff and goofy stuff."

"And we have some fun," Heimann said.

Patrick O’Reilly, who is a member of the SHOUTeam, said he decided to come to the Popple concert because the band sounded good to him and he wanted to "hang out with some friends and listen to their music and have a good time."

At 8:00 p.m., the music began as Harms and Heimann approached the stage and started the concert with their first song.

"We’re going to get started at the very beginning with the very first song ever," Harms announced.

Then he and Heimann began to sing, "This is the first song. …"

Harms and Heimann continued with the song, "I’ve got a feeling," which led into the next song that introduces the band called "P-O-P-P-L-E."  As they sang and played, cheers and applause filled the gym.

Directly following the classic, "In the jungle," Popple sang their original song "Heist" a song about a bank robbery. Then they sang a song about an old, popular video game called "Contra."

Preparing for one final song, Harms clutched a ukulele and said, "I wrote kind of for my little dog."

Then Heimann piped in, "I was looking for my kazoo, it’s in my pocket," he said as laughter erupted and somebody from the audience shouted out, "that’s funny."

They concluded the concert with an original song called, "Puppy Dog."

Christine O’Reilly, had said what she hoped to take from the Popple Concert was to "learn some new music, listen to music, and have a good time with my family."

In the end, O’Reilly said the concert was really good and "the music was wonderful."

"The two guys in the band—they were awesome, they were hysterically funny.  Their music talent is unbelievable."

"I loved the fact that the one guy was shoeless," she added. "Well, he had shoes on before and after but not during. I just thought that was pretty funny."