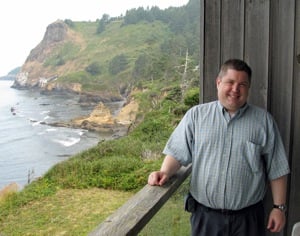 I remember lying in bed on a windy night as a young child and listening to all the creakings and groanings of our century-old house.  There were no more encouraging sounds of people up and about downstairs, and even the traffic going by outside had fallen off considerably.  Everyone except me was fast asleep, and the feeling of being alone was perhaps more pronounced on account of my parents’ divorce.  I sat and stared into the dark and tried to avoid the urge to wake my mother down the hall or turn on the bedroom lights.  Bedtime was a word at which I cringed--not that my mom was ever strict about it.  Sleeping often brought a night filled with small terrors punctuated with dark nightmares.  As my faith (and age) matured, these difficulties began to recede.  The nameless fears began to lessen and were replaced by the relatively more mundane thoughts and plans of a young adult.  Still, I never forgot the incredible intensity and debilitating power of fear as a young child.

If a child tries to combat deep-seated fears with will power alone, any eventual success is tempered by the child’s struggle.  In my case, for example, the battle against childhood fears was often a kind of (internal) wild flailing: unfocused and largely unproductive.   One episode that illustrates this particularly well took place when I was car camping with my mother at the Dungeness National Wildlife Refuge on Washington State’s Olympic Peninsula.  When night fell, I became frightened by the deep darkness beyond the car windows.  As a city boy, it was one of the darkest nights I had ever seen.  In the middle of the night, I quietly exited my mom’s old Vega and began to sleep-walk through the quiet campground.  It was pitch black, and I remember stumbling into cold puddles with my thick wool socks.  At one point, I came conscious enough just to see twinkling city lights in the distance--either Sequim or Port Angles.  I recall half waking up to make decisions as to which direction to go, then I’d find myself somewhere else entirely.

Although my sense is that it took me a long time to find my way back to our camp spot, I never felt anything I would quite describe as fear.  This seems to have been how my subconscious tried to take on the fear of the dark coastal night.  It would have been so easy for that night to have ended tragically for me, and that’s why this experience highlights the trouble with "going it alone." It’s the job of the parents and other trusted adults to help guide these children away from their fears and to the welcoming light and safety of Christ.  I am particularly grateful for the kindness and endless patience demonstrated by my mother over my early years.  Without her help and support, I’d probably still be scared of the dark!

Prayer and humor seemed to be two of the more powerful weapons against fear.  After all, it’s hard, if not impossible, to be simultaneously laughing and afraid.  Perhaps that’s why I chose overcoming fear as one of the main themes in my upcoming children’s book entitled Tristan’s Travels (coming from Rafka Press in fall/winter 2010).  One of the verses that guided me on my writing endeavor was Philippians 4:8.

In an age where too many children seem to bypass the innocence and lighthearted joy of childhood altogether, it was always my goal to make children laugh--without polluting their minds with our cultural garbage.  That is how I, at least, write for children.

The best way to illustrate this is to quote directly from my tale.  The following scene concerns Tristan and his central fear of flying (among other things).  Tristan’s squirrel friend Nipper is replaying a memorized children’s homily overheard outside a church window (courtesy our own parish priest, Father Timothy Mockaitis).

Nipper carefully wrapped his tail around his head and began the "recording."   "...Now, St. Francis walked up to this wolf who had terrorized the people of a town called Gubio.  It was not far from Assisi where Francis lived.  They came to Francis and told him the wolf was chasing and sometimes hunting down the sheep in the fields around Gubio.  So, what do you think Francis did?’"

Nipper sprung up like a jack-in-the-box and scampered forward a short distance before spinning around to face spot where he had just been.  He waved his paw in the air.  "Oh, I know!  I know!  Call me!" Nipper said before darting forward again to face his "audience." Tristan and Furdock watched the spectacle unfold with astonishment.  Nipper smiled faintly as he called on himself.   Then, like a shot, he was back in the audience with his paw raised.  For a split second, a look of confusion settled on Nipper’s face, then he declared confidently, ‘Francis went to help the people!’

"That’s right, Margaret," Nipper recollected, not bothering to change places again.  "He did more than just help.  He walked out to the field and confronted the wolf.  He scolded him for being so mean and for scaring and chasing the sheep.  What do you think happened then?  Well, what actually happened surprised everyone.  That vicious wolf walked slowly up to Francis, lowered his head, and sat down at the feet of Francis – like a puppy who just wants to be petted.  And from that day onward, that wolf followed Francis everywhere he went and became his pet.  No longer were the people afraid of the wolf and they loved Francis all the more.  Francis was never afraid, and he changed fear into love.  Love is always more powerful than fear, and God’s love takes away all fear." Nipper promptly collapsed.

"It all makes sense now," Tristan said.  "When Saint Francis was telling me not to be afraid, he meant that I would be safe, because God’s love takes away all fear..."

When we find ourselves or a loved one walking "through the valley of the shadow of death," hold fast to Christ.  Like Lady Galadriel’s vial given to Frodo as a light for dark and terrifying times, darkness flees the light.  If we remember that love is greater than fear, we can overcome anything through Him who is within us.  His power transforms our weaknesses into new strength and infuses us with a courage that is not our own.  As Father Dwight Longenecker recently quoted Martin Luther within an article appearing in the National Catholic Register, "The best way to drive out the devil, if he will not yield to texts of Scripture, is to jeer and flout him, for he cannot bear scorn." Laughter and love are powerful weapons indeed for one’s spiritual arsenal.

About the Writer - Karl Erickson is the author of Tristan’s Travels, scheduled for publication by Rafka Press in late 2010.  Although he considers himself primarily a children's writer, his articles have appeared in America, The National Catholic Weekly, Catholic Answers' This Rock, Church Music Association of America’s Sacred Music, Episcopal Church News, Seattle Pacific University's Response, TiberRiver Catholic Book Reviews, and even as a special feature writer in an issue of the Portland Tribune.  His fantasy short story entitled "Stars Within the Glass" appeared in Catholic Blog Fiction.  He was also a photographic and written feature contributor for Churchmouse Publications.

When not writing, his wife, Kimberly Erickson, and he enjoy opportunities to speak and share their family’s spiritual journey. Karl is also one of the founding members of the Catholic Writers' Guild, a new association of Catholic writers and artists engaged in trying to make a difference for God and bring creative renewal to Catholic literature.

Besides being the illustrator of Tristan’s Travels, Kimberly is skilled at water gilding (ancient technique of gold leafing).  She is also the daughter of artist John Collier, the celebrated sculptor of the Catholic Memorial at Ground Zero in New York City.  It should be no surprise, then, that the busy intersection of faith and the arts is a particular passion for both Karl and Kimberly.

In Karl’s "spare time," he currently works as a Tax Auditor for the State of Oregon.