Complete Harmony for the Singing Priests 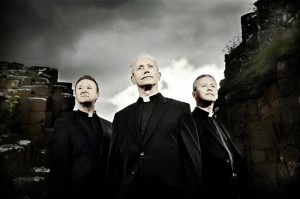 Many of us have enjoyed the music of The Priests.  Today, I wanted to share with you some additional information on these holy singing talents.  For more information or to order their new CD, visit www.thepriests.  I hope you enjoy this beautiful rendition of Amazing Grace.  The following information was submitted by their publicist and is a fascinating look at The Priests.  Lisa

The Priests are a classical musical group made up of Fr Eugene O’Hagan, Fr Martin O’Hagan and Fr David Delargy. The trio met for the first time at St MacNissi’s College, County Antrim, and quickly realised their musical prowess as a singing trio. Singing was both part of prayer plus, in their spare time, they performed in local operas, musicals and choirs.

The Priests continued following their vocational training at The Seminary in Belfast and concluded their training at the revered Irish College in Rome after studying there for a total of 16 years between them. It was in Rome that their combined and rare talent was recognised, signified by the invitation of the Pope’s private secretary, the Papal Master of Ceremonies, to sing for the Pope in the sacred liturgy.

The Priests talent was soon recognised by Nick Raphael, a Sony Music record label head, and they signed to the label for a £1Million contract on the steps of Westminster Abbey in April 2008. The Priests were adamant to never allow their music commitments to stand in the way of their day jobs and parish obligations, and this is written into their contract.

The Priests debut performance was a spectacular event in Northern Ireland’s Armagh Cathedral in September 2008 where they sang a collection of classical and religious songs for a packed cathedral as well as for film cameras that were later to be broadcast coast to coast on the United States PBS channel. The concert was later released on DVD and soon became a best seller.

Their debut album, The Priests, was produced by legend Mike Hedges and Sally Herbet and released in Ireland on the 14th November 2008 by Epic Records. Globally it sold almost 2 million copies in more than 40 countries and topped the charts in Ireland, going platinum seven times over, as well as making the top tens in album charts and hitting platinum in countries as diverse as Spain, Norway and Sweden. To mark the album release an ITV documentary was broadcast detailing their extraordinary rise from obscurity to global stardom.

The Priests have since scooped the Guinness World Record for ‘Fastest-selling UK debut for a classical act’ and been nominated for a Classical Brit. They have played in venues across the world, playing live to 3,000 people in Sydney and to 6,000 people at a homecoming gig in June 2009. Other accolades include a personal invitation to sing for The Prince of Wales and The Duchess of Cornwall as well as starting out their tour with a performance in the presence of HM The and Mary McAleese, the President of Ireland at a huge peace and reconciliation charity.

Their rise to global stardom has been documented across the world’s print including headline features in the Washington Post, Time Magazine and Observer Music Monthly and they have appeared in TV shows across the world with artists from Tom Jones to The Killers including the BBC’s coveted Jonathan Ross show and the News at Ten with Sir Trevor MacDonald.

Their second album, Harmony, is now available from Sony label Epic. The album features tracks such as The Lord’s Prayer and Amazing Grace.

Complete Harmony for the Singing Priests

The Priests, the singing global superstars who broke the Guinness world record for the fastest selling classical debut album of all time, are releasing their second album in November. The album, entitled Harmony, will feature tracks such as The Lord’s Prayer and Amazing Grace and will be released once again by Sony label, Epic.

The Priests, brothers Fathers Martin and Eugene O’Hagan and Father David Delargy, were young school friends when they first sang together at the age of  12 (Martin and David) and 15 (Eugene).  Their love of singing continued whilst studying for the priesthood in Rome.  Once ordained, all three took up parish commitments.  Singing was both part of prayer plus, in their spare time, they performed in local operas, musicals and choirs.  In February 2008, a record company scout knocked on their door and asked them to make a demo.  The rest, as they say is history.  The Priests never allow their music commitments to stand in the way of their day jobs and parish obligations.   So adamant are they that their priestly duties must come first, their recording contract stipulates that they will never be asked to put record promotion ahead of their pastoral work.

Since signing the £ million contract on the steps of Westminster Cathedral in April 2008, the Priests have enjoyed phenomenal global success. The release of their first album The Priests lead to them being nominated for a Classical Brit.  If that wasn’t enough they have given one off performances to The President of Ireland, The Prince Of Wales and The Duchess Of Cornwall and last but no means least, Her Majesty The Queen.

The full time Priests and part time pop stars have performed live shows in Australia, the UK, America, Canada and Ireland, been front page news in some of the world’s largest publications, including Time magazine and The Washington Post.  They have appeared on TV shows across the world with artists from Tom Jones to The Killers and made whistle stop visits to over 17 countries. They have even been interviewed by Jonathan Ross on his coveted prime time chat show as well as making the 10 o’ clock news with Sir Trevor McDonald. Their attraction then is evident, but Harmony proves once again that their talent is their most enduring feature and that 30 years of practicing paid off.

For more information or to order the new CD, visit www.thepriests.

The Priests - Harmony - Catholic CD Review
Read
The Priests
Read
An interview with the Priests at St. John's Food Pantry: International Singing Stars with the Hearts of Servants
Read