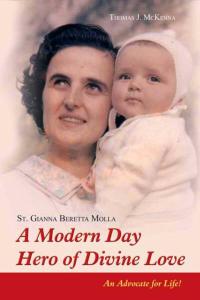 At the canonization of St. Gianna Beretta Molla, Pope John Paul II stated "The extreme sacrifice she sealed with her life testifies that only those who have the courage to give of themselves totally to God and to others are able to find fulfillment." St. Gianna, who lived from 1922 to 1962, was a woman of our own time. A physician, she was a working mother who lived a life of service to her family and her community. In the booklet "St. Gianna Beretta Molla: A Modern Day Hero of Divine Love," Thomas J. McKenna provides a brief biography that will help introduce readers to the life of this modern day saint.

Raised in a devout Catholic family, she was devoted to Christ and the Church from her earliest days. As a teenager, she was deeply affected by attendance at a retreat based on the Spiritual Exercises of St. Ignatius of Loyola. Soon after, she became active in the Catholic Action movement, "a lay spiritual movement that helps its members follow Christ by emphasizing prayer, service, and sacrifice." She chose to study medicine because she felt it was the best way she could help people in both body and spirit. She would ultimately choose to specialize in pediatrics. She always felt that her role as a doctor was a calling from God.

She was an active woman with many interests, among them painting, music, and mountain trips. In 1955, she married Pietro Molla and devoted herself to Christian marriage and motherhood. She gave birth to three children in quick succession, and then suffered two miscarriages. In September 1961, she was expecting her fourth child when doctors found a large fibroid in her uterus. She was given three choices: remove the tumor, the unborn child, and her uterus (the only sure way to save her life); remove the tumor and the unborn child; or only remove the tumor. Even though she knew it was the riskiest course of action, she chose the last option and instructed her husband that if he was forced to choose between herself and the child, to choose the child. April 21, 1962, Gianna Emanuela was delivered via Cesarean Section. After suffering for a week, St. Gianna died on April 28, 1962 at the age of thirty-nine.

This booklet also contains excerpts from St. Gianna’s own writings which allow readers to get real insight into her thoughts and observations, as well as a collection of prayers to ask for St. Gianna’s intercession.

" is a wonderful introduction to the life and spirituality of this saint.