Family TV Night - A Walk in My Shoes 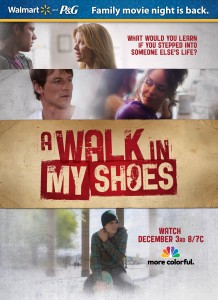 Have you seen the wonderful trailers playing on NBC for the new movie "A Walk in My Shoes"? Just in case you haven't, I wanted to share the great news about this family-friendly movie that will be airing Friday, December 3 at 8 pm (7 CT) on NBC.  The film is sponsored by Walmart and Proctor & Gamble as part of a larger initiative to take back television and provide for positive, uplifting and entertaining family viewing options.

I haven't seen the film yet, but based on this great trailer, I can't wait to pop a bowl of popcorn, gather my family and enjoy this together.

I hope you'll view the trailer and please consider sharing it on your blogs, websites and with your social networking contacts.  We need to support and encourage programs like this if we hope to have more acceptable choices in the future for our families.  So tweet, share, and facebook this and ask your friends to do so as well!  Happy viewing!

Here's some additional information on "A Walk in My Shoes":

"A Walk in My Shoes" makes viewers stop and think, "What would I learn if I stepped into someone else’s life?" Stressed-out high school teacher Trish Fahey (Nancy Travis, "Three Men and a Baby," "Becker") can’t understand her students’ lack of effort in the classroom and why their parents don’t seem to care. This is especially true of Justin Kremer (Cameron Deane Stewart), a popular, skateboard-loving, basketball star who is underperforming in her class. Trish has him suspended from the basketball team and quickly chalks up the situation as a case of bad parenting.

This perspective dramatically changes when Trish meets Molly (Yara Martinez, "My Own Worst Enemy"), a mysterious stranger intent on helping her see things differently. After a car accident, Trish wakes to find herself living the life of Cindy Kremer, the woman she has rashly judged and criticized. Molly helps Trishdiscover that there is more to the story and learns a powerful lesson that affects everyone she interacts with, including her husband, daughter and the Marine next door. No one is left unchanged.

"When I read the script for ‘A Walk in My Shoes’ I was instantly drawn to the character of Trish Fahey, because I think many of us have found ourselves in similar situations," stated Nancy Travis. "It’s important to remember that today many families, especially those with members serving in the military, are balancing many pressures, so I was happy to work on a project that not only brought family-friendly programming to television, but addressed these life lessons."

"A Walk in My Shoes" will take viewers on an inspirational journey, as they experience how families can come together in the face of adversity. The film’s main characters are forced to confront their pasts and learn valuable life lessons in an uplifting manner that families can enjoy together. This emotional story is an expansion into the dramatic genre for P&G and Walmart as the first two films, "Secrets of the Mountain" and "The Jensen Project" were family adventures.

Yara Martinez, best known for her work in CBS’s "The Unit," plays the role of Molly. Philip Winchester, who starred as the title role of Robinson Crusoe in the NBC action series "Crusoe," plays Jake, a Marine who lives next door to the Kremer family. The roles of Cindy and Justin Kremer are played by Jana Lee Hamblin and Cameron Deane Stewart, respectively.

"A Walk in My Shoes" will also feature a soundtrack produced by music mogul Randy Jackson that includes songs from artists such as Michael Johns, Judgment, and Walking In Space. The "A Walk in My Shoes" DVD and soundtrack will be sold together in a bonus pack exclusively at Walmart startingSaturday, Dec. 4. For more information visit www.awalkinmyshoes.com.