Taking My Blogging into The Confessional 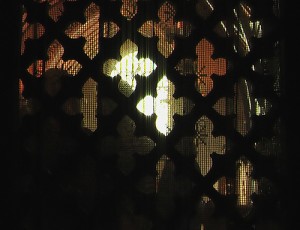 "I finally found something that works for you - the look on your face was priceless," my priest said this afternoon.

The outpouring of support, encouragement, and Holy Spirit inspired suggestions was really touching after I rambled on about my poor prayer life at Kitchen Stewardship a few weeks ago. One faithful reader (or two or three) reminded me of the importance of sticking close to the sacraments, particularly the Sacrament of Confession.

It was really important to me to make it a priority to get to Confession, partly as a show of good faith that I'm really trying to get my prayer life in order, partly because I needed, I craved that grace of absolution, and mostly because my soul was struggling under the weight of poor priorities.

When I confessed that my priorities were out of whack, that I was too often putting my work writing before my prayer time, and that the lack of sleep was trickling down to negatively affect my parenting, I knew it was going to be a tough penance.

Father, as is his personality, made sure I had my semantics correct first.

Itís not about priorities, it's about balance. (Ironic, I thought, considering the tagline of Kitchen Stewardship is "finding the balance.")

We don't need to talk about putting God first, because that sets up tensions between first, second, third priorities. We need to say we want God in the center of everything.

If you're getting distracted at Mass because you're thinking about blogging, is that a sin or a moment of grace? Perhaps it's a chance to help you refocus your writing on God.

Rather than trying to put God first, by way of subjugating everything else, what you need is to get God in the center of all that you do. You need to get balanced.

And then he went in for the kill: Father asked me what I would do as a parent if one of my kids came to me and said they were being ruled by their computer.

I'm sure the look on my face was priceless, as I became afraid he would tell me I had to stay off the computer for a week! (I'm a terribly strict momma sometimes.)

My penance is to set limits (hard for me ñ self-discipline is my greatest weakness!). When I sit down to work, I have to set a timer. When that timer beeps, no matter what I'm doing, I stop. He told me I have to just trust God that whatever needed to get done, was done, and I'll be able to figure out where I left off when I next come back to work.

Father also said that I'm allowed to be mad at him when the timer beeps, not myself, or God, or anyone around me.

The grace of confession is a great thing.