If Only I Could Show Them The Way 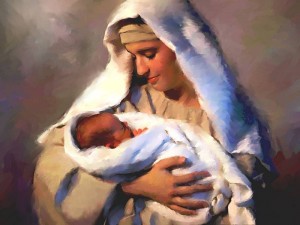 In the years since my ordination, I’ve been so often reminded of the powerlessness that priests and deacons have in bringing people to repentance and conversion. Yes, I know it is really the Holy Spirit that brings about these changes -- but I also believe that priests are the gloves that God uses to touch people.

Without suggesting that this is judging the hearts of people, I have heard a man repeat over and over that he doesn’t believe in going to a priest to Confession. Yet this same man for years has come to Mass each weekend and goes to Holy Communion. I may not know his heart -- and only God will judge him -- but I do believe that man sins at least by speaking against the wisdom and the practice of the Church.

I often think to myself... if only I could show them in words and documents where they are wrong in what they are doing. If only I could show them the way. And then, for this Christmas column, I remembered this old ‘parable’ written by Louis Cassels many years ago. He was with the United Press International as one of the religion editors. His words explain God’s problem. Not my problem -- but the 2,000 year old problem that even God had with mankind. I’ll let Mr. Cassels finish my writing effort for this month.

“Once upon a time there was a man who looked upon Christmas as a lot of humbug. He wasn’t a Scrooge. He was a kind and decent person, generous to his family, upright in all his dealings with other men. But he didn’t believe all that stuff about Incarnation which churches proclaim at Christmas. And he was too honest to pretend that he did. “I am truly sorry to distress you,” he told his wife, who was a faithful churchgoer. “But I simply cannot understand this claim that God becomes man. It doesn’t make any sense to me.”

On Christmas Eve his wife and children went to church for the midnight service. He declined to accompany them. “I’d feel like a hypocrite,” he explained. “I’d rather stay at home. But I’ll wait up for you.”

Shortly after his family drove away in the car, snow began to fall. He went to the window and watched the flurries getting heavier and heavier. “If we must have Christmas,” he thought, “it’s nice to have a white one.” He went back to his chair by the fireside and began to read his newspaper. A few minutes later he was startled by a thudding sound. It was quickly followed by another, then another.

He thought that someone must be throwing snowballs at his living room window. When he went to the front door to investigate, he found a flock of birds huddled miserably in the storm. They had been caught in the storm and in a desperate search for shelter had tried to fly through his window. “I can’t let these poor creatures lie there and freeze,” he thought. “But how can I help them?” Then he remembered the barn where the children’s pony was stabled. It would provide a warm shelter.

He put on his coat and galoshes and tramped through the deepening snow to the barn. He opened the door wide and turned on a light. But the birds didn’t come in. “Food will lure them in,” he thought. So he hurried back to the house for bread crumbs, which he sprinkled on the snow to make a trail into the barn. To his dismay, the birds ignored the bread crumbs and continued to flop around helplessly in the snow. He tried shooing them into the barn by walking around and waving his arms. They scattered in every direction - except into the warm lighted barn.

“They find me a strange and terrifying creature,” he said to himself, “and I can’t seem to think of any way to let them know they can trust me. If only I could be a bird myself for a few minutes, perhaps I could lead them to safety. . . .”

Just at that moment the church bells began to ring. He stood silent for a while, listening to the bells pealing the glad tidings of Christmas. Then he sank to his knees in the snow. “Now I do understand,” he whispered. “Now I see why You had to do it.”

Merry Christmas from Deacon Tom (and from DW Dee). We invite you to visit us at www.catholicvitamins.com