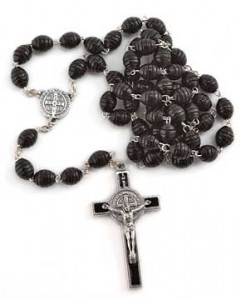 Back in August, I began to feel the strong pull to pray the daily rosary. I resisted. After all Mary, I told her, I already had a prayer discipline, I had these nine children, I was pregnant and there was all this stuff to do every day. The push became louder in September, when I was confronted with not one but two rosary projects, one by my fifth grader and one from my freshman in high school. Two trips to Michael’s and two weekends of helping with the creation of two rosaries put the idea back at the front of my head and still, stubborn as I was, I refused.

October came and the kids at school participated in a living rosary where several of my children had key parts. I told myself it was coincidence but in my heart of hearts, I knew, once again Mary was asking for me to pray. I could even see why she wanted me to pray. My husband was preparing for trial and had been making out of town trips at least once every other week in August, September and October, and November looked to be a time when he would not be home at all except perhaps on weekends. It would strengthen me for the time to come I knew. It would give me graces and open my heart to more than I could imagine. There was no harm. Dutifully I put a rosary in my purse and a “How to pray the Rosary” card from our prayer table for a reminder and help in remembering the mysteries of the day but that’s as far as it got.

October became more difficult in big and small ways. College applications loomed for my oldest, my next oldest started try outs for sports and one daughter struggled in grade school in every subject. My husband was in and out of town weekly and the car needed a major repair. I began to suffer from writer’s block and found out I had gestational diabetes; the tasks of every day seemed to mount and mount and mount and my brain felt stunted. I prayed for relief as the frustration was adding to my stress. The idea of writing about the rosary came to my brain, but I pushed it aside because that would mean I’d have to start it and I just wasn’t ready. At every opportunity, Mary was offering her hand as I cried for help, and at every opportunity, I was refusing the help being offered.

November came and it was hard. Harder than I imagined, harder than I cared to admit. My parents and in-laws made trips to Maryland to help. But I kept trying to hold things together and ignore the one thing God was asking on the grounds that I was too busy.

An emergency cropped up where the one daughter who had been struggling academically, landed in the hospital and other family had to be called in for support. That night in the ER, I could feel Mary’s gentle firm insistence. She was asking and finally, worried, worn and frightened for my eight year old who had inexplicably begun seeing double in the middle of class, I pulled out the tattered sheet from my purse. The night passed, my daughter was put through all kinds of exams while I could do nothing but pray the rosary and text my husband about what we were doing. He felt equally helpless as he was at least trapped until morning away from me, from her, from all of us. It was a Tuesday, and the sorrowful mystery of the Agony in the Garden resonated as I waited unknowingly for whatever news the tests from the doctor revealed. My husband mentioned that he had prayed the rosary, and that bolstered me to finish the whole prayer as I watched my daughter try to sleep. The doctors told us to go home, and to follow up with various specialists.

Like an Atheist in the foxhole, once set free, I returned to not praying the rosary, although I occasionally would run across the rosewood beads and “How To” paper in a search for my keys, cell phone or ATM card. Advent started. Going to confession, going to weekly mass, praying daily the ordinary stuff of grace and before bed, I told myself I was doing as much as I could. Never mind that the Blessed Mother had been practically pouring rosaries into my lap for three months. Mary thankfully, was undeterred.

Putting up the crèche, I was reminded again. Going to my children’s school for a Saint Nicholas program, my son’s blue and gold rosary was in the display case. My husband was still in trial. Taking them to Saturday night vigil mass, a woman handed me a card from the Legion of Mary and told me her name and said she would pray for me. The next Sunday, my husband still in New York, still away but with the end near in sight; my daughter still seeing double but with all the scary possibilities ruled out, my two youngest girls found rosaries at the prayer table in the back and each drape themselves in one and listened to their next older brother explained that this was for praying and how he’d been part of a living rosary. I couldn’t miss it. I’d ignored it. I’d refused it. I’d told myself I was too busy. I’d felt overwhelmed. It wasn’t that I wasn’t praying. I prayed with the kids, I prayed sometimes for what I thought we needed, and even had some prayers immediately answered and still, I held the rosary back. It wasn’t that I didn’t know what Mary wanted. Fortunately, Mary hadn’t given up on me and continued to drape my path with invitations to pray.

My husband’s trial ended and my daughter’s malady properly diagnosed and once fixed, benign. Only upon his homecoming and this news did I come to recognize how stretched and thin and worn my body, mind and spirit felt. I’d told myself it was pregnancy, but this was more, this was a spiritual dryness that had come from being away from my best friend, my greatest support given to me by God on this earth, and by my stubborn refusing for four months to take the spiritual medicine God had offered for such trials.

My soul felt shattered with both relief and exhaustion from the whole ordeal of it all and I wondered how I would feel “right” again and there it was sitting in my purse waiting. So starting at Christmas, finally, I picked up the rosary and started to say it. It took three days of interruptions for me to get through my first one. The next day, I managed to get through it all over the course of the day. Like greeting my husband and seeing him daily again, the rosary applied bandages to the thousand unseen cuts and scars and sins that had built up over four months of separation, anxiety, stress and worldly weariness and I wondered why I’d been so resistant.

But the answer lay in the scene at the manger I’d placed on the piano in preparation for Christmas. The soul is by it’s original sin, in a state of disunion with God. All that is required of any of us to receive God’s grace, is repentance. All that follows in our lives comes from seeking God with a full heart. I’d been out in the field like a shepherd, unwilling to leave even for the wonder of the star and the call of the angels; yet constantly bemoaning how cold and hard and difficult watching these sheep was; until eventually, I could not resist the beauty of it all and had to come; until I fell on my knees.

Mary had rained rosaries on me for four months. God forgive me for the time I’ve wasted.