Birth of a Family: Review of “Change of Plans” 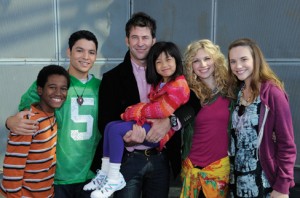 This weekend I had an opportunity to preview the upcoming “Family Movie Night” feature, Change of Plans (FOX, January 8 at 8 p.m. EST).  As I watched, I couldn’t help but compare this couple’s experiences with what my husband and I went through when we first received our children.  Chris was 2-1/2, Sarah was nine months, and their older sister “C” was almost 5.

I remember very little about the first week of (foster) parenthood.  It was an endless, sleepless food fight, punctuated with moments of incoherence and self-doubt.  I don’t think I showered the entire time, except when I got caught in the crossfire while bathing the three squirming rug rats:  To put it mildly, I had been pushed into the deep end of the parenting pool.

We had asked the agency for a maximum of two children, and they sent us three.  “Just take them for a week, and see . . .” At the end of the week, the phone rang. Would we take the kids on a permanent basis?  We knew the kids needed a place – but the whole experience had left me feeling like such an abject failure as a mother, I wasn’t entirely sure it was in anyone’s best interest to even consider it.

The night after we returned the children to their temporary foster home, Craig walked in the door after work and shoved a CVS photo lab envelope into my hands, interrupting a long litany of reasons why we shouldn’t consider taking them. “Hey, look at these.”  As I gazed at each image, the details of our week together struck me full-force:  Christopher and his sister decorating cookies, their faces encrusted with sugar.  Sarah reaching a tentative finger toward a grumpy camel at Domino’s petting zoo.  The three kids huddled up with a supersized bowl of Cheetos.

The last photograph arrested my attention:  It was of me sitting on the edge of the tub holding the baby in my lap, the older two splashing in the water.  I had gallon-sized bags under my eyes, and looked as though I hadn’t brushed my hair all week.  But with Sarah nestled in the curve of my arm, I looked . . . happy.  Delirious, but happy.  Some time during that week, I had become a mother.  “Call the social worker,” I told my husband.  “Let’s go get the kids.”

This week when I previewed Change of Plans (FOX on January 8 at 8 p.m. EST/7 Central), I saw that same metamorphosis: the birth of a family.  Four orphaned children are unexpectedly foisted upon a childless “professional” couple, who agree to a temporary arrangement, unable to live with the prospect of sending their friend’s children to a group home.  There were no grandparents or extended family, and so they stepped up – reluctantly, as the social worker (played by “Cosby Show” mom Phylicia Rashad) searched for another placement for the children.

***  Watching the movie, I recognized instantly the “bathtub moment” for the main character, Sally Danville (“American Idol” finalist Brooke White).  In a split second, she must choose between fulfilling a lifelong dream and the path ahead of her.  And in that moment of choosing, a mother – and a family – is born.  ***

This is an aspect of adoptive family life that can come as something of a surprise to new parents.  While pregnant women have nine months to form a bond with their child and “feel” like a mom before the child arrives, adoptive mothers bond after “delivery.”  (This may be especially true of women who has never parented a child prior to adopting. Never having been pregnant, I couldn’t say for sure.)

I recognized the change in the children as well:  The mothering instincts of the oldest girl, and her reluctance to abdicate that responsibility to a stranger. The tentative, sometimes sneaky impulses of the boys to maintain connections to the familiar – holding tightly to any small reminder of home.  The unbearable cuteness of the very small girl, who wanted to hear again and again of the parents she was sure would return.

It was heartbreaking. And yet somehow, uplifting at the same time.  A welcome reminder of the resilience of children who, having experienced love, are willing to open their hearts to love again.  And with any luck, it will inspire families to consider whether they might open their homes to one or more children in need of a family.

If after seeing this movie you would like more information about foster care or adoption, contact the Dave Thomas Foundation For Adoption, 525 Metro Place North, Suite 220, Dublin, Ohio 43017 1-800-ASK-DTFA (1-800-275-3832) | info@davethomasfoundation.org

Watch Change of Plans January 8th at 8 pm (7 CT) and look for the DVD release on March 22.

The Mass From Our Past
Read
A Serving of Humble Pie
Read
Download Story of St. Patrick + 40% off Sale Now!
Read