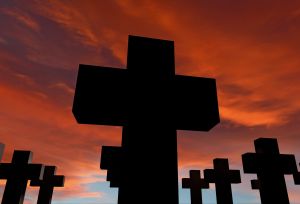 We just buried a just man in our parish. His name is Joe. His lovely wife Joanne has been the organist in our parish, and Joe has been a faithful worker at the wonderful St. Vincent De Paul Society operation.

About a year ago, Joe seemed to struggle with on-going colds and congestion in his chest. His illness continued through several doctor visits until he was diagnosed with lung cancer. When discovered, it was metastatic and the prognosis included options to only delay the inevitable. Joe and Joanne traveled to the M. D. Anderson medical complex in Houston and they were given a ray of hope with a new treatment program that showed promise for Joe’s type of cancer. Ultimately, it was determined that his cancer was one in ten that refused to respond to the treatments. Joe died on January 7th, surrounded by his wife and a few family members.

Another deacon and myself had been the primary Ministers bringing Jesus in the Eucharist to Joe during the months that he was too ill to get off his couch. Sometimes, his pain was so bad that he didn’t want to move anything. And yet, I was so impressed at the good humor and appreciation that Joe manifested when I came with Holy Communion. A few times, after Communion, we prayed the Chaplet of Divine Mercy together. I often noticed Joe’s Bible was open and there were highlighted text and underlined areas everywhere. Joe loved Holy Scripture.

Why I’m sharing this with you is that many of us have gone through this hell in one form or another. I lost a brother at age 45. He too died a horrible death due to a lung cancer that went into his spine and elsewhere. There are so many memories of that period of less than a year. One is the number of times when there would be small glimpses of hope or promise. There would be really good days, followed all too soon by a violent crashing into the waves of a disease with ultimate physical power.

There was the day when I met with my brother Eddie for a personal talk -- sort of a beautiful talk of what we would do when his cancer was cured or put into remission. We talked about going together into upper Michigan and visiting Mackinac Island and staying at the Grand Hotel where the movie Somewhere in Time was filmed. There was the suggestion that I would be Eddie’s caretaker pushing him around in a wheelchair but he’d be directing because he had been to Mackinac before. He wanted me to see and experience it. We also skirted about the other not so positive possibilities -- but not too much. For that was a day of hope.

Cancer cures for many types of cancers are going up, thanks be to God and medical research. All too sadly, some forms of breast and lung and pancreatic cancers still seem in control and in power in spite of much work.

Nothing -- absolutely nothing will make it much easier for victims or loved ones in this area of battle. It was Winston Churchill who said, “If you’re going through hell, keep going.” And that is what the best witnesses have demonstrated as far as patients or their family members are concerned.

What I mean by that is found in the example of Joe who was prayerful and positive through much of his final months. What I mean is found in the little snippet of experience from my brother Eddie’s battle. Eddie was a good looking, single person when his epic battle started. Several of the nurses enjoyed taking care of Ed -- his personality, smile and appreciation for them was Irish in its magic.

When Eddie passed away, I was at the funeral home during one of the visitation periods. A nurse that I think had virtually fallen in love with Eddie came to pay her respects. She wrapped her arms around me and held me and she sobbed, “This wasn’t supposed to have happened... it shouldn’t have happened.” They wanted Ed to win the battle.

It was Eddie’s ways... and the ways of those who kept prayerful watch with him that demonstrated a loving commitment to keep slogging through hell -- to keep going and get to the other side. Joe and Eddie are on the other side now. It might not be the way that living family and friends desired. But, like martyrs, they gave great witness and hope.

If you are caught up in this battle these days -- I pray that God will speak to you during those silent periods of seeming abandonment. And along with His love and His arms wrapped around you, may you also hear His voice: “If you're going through hell, keep going.”