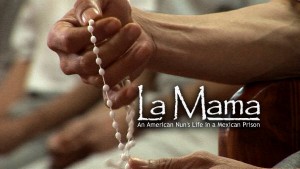 God’s plans for us do not end when we become parents or enter religious life.  Throughout our lives, he continues to call us to serve him with our gifts and talents.  Even as we age, this sense of “calling” can lead us to extraordinary things . . . if we are willing to answer that call.  I was reminded of this truth in a powerful way very recently, when I was given the opportunity to review “La Mama: An American Nun’s Life in a Mexican Prison,” a documentary about the life of Mother Antonia Brenner directed and produced by Jody Hammond.

At first glance, Mary Brenner was not exactly an obvious candidate for religious life.  Each of two marriages had ended in divorce, and she was a mother of seven grown children.  At the age of fifty, this Beverly Hills matron was well past the desirable age of most religious orders.  And yet, for the past thirty years she has been serving God . . . from inside a notorious prison in Tijuana, Mexico.

She is a force of sheer will, tempered by genuine love.  With a smile she melts the hearts of prisoners, and prompts reluctant donors to give more generously than they’d intended.  She is a woman who has known personal failure and regret – and yet, even these things have become a source of grace, enabling her to reach even the most hardened criminals with love and compassion.

How could a woman accustomed to a life of privilege do such a thing?  There is only one reason that matters: She believed God was calling her.

Convinced of this, she persisted until she found the place God wanted her – and she established an order for women, like herself, who wanted to be of use to God in the twilight of their lives.  The “Servants of the Eleventh Hour,” an Eudist order formed in the spirit of St. John of Eudes  (a close friend of St. Vincent de Paul) and formally accepted by Bishop Rafael Romo Munoz of Tijuana, Mexico and Bishop Leo Maher of San Diego.  The sisters, who are generally between the ages of 45 and 65, renew their vows annually as they serve the poor and needy in both Mexico and the United States.

Mother Antonia Brenner started the “Casa Campo de San Miguel” for women needing shelter due to poverty or illness near La Mesa Prison, where she and her sisters could minister to the inmates, guards, and their families.  In the documentary, we see the room where Mother Antonia lives simply, without even the most basic amenities such as hot running water.

I was profoundly moved as I listened to Mother Antonia talk about her life – how even her failed marriages had prepared her to treat her “sons” (including both inmates and guards) with dignity and respect.  Said one prisoner, “Even though our mothers are no longer with us, we have a mother. Mother Antonia is our mother now.”

When I showed the movie to my fifth grade class, they said, “She’s kind of like Mother Teresa. No matter what, she just kept doing what God wanted her to do. Even if it was REALLY hard.”

To order this movie for your next family movie night – perhaps during Lent! – or to see a preview, click here.