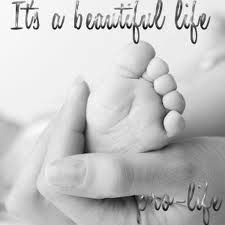 This week marked the 38th annual March for Life in our nation's capital where pilgrims from across the country gather in solidarity to lift their minds and hearts to Our Lord in heaven, in thanksgiving and respect for  the sacredness of human life in all of its stages! Marching to the steps of the Capitol building, the defenders of life continue to hope to raise the consciousness of our nation's leaders and open their minds to the great worth of human life; and the inherent right for it to be protected under our Constitution!

The first official March for Life was held in January of 1974, with approximately 20,000 pilgrims in attendance. Last year's March gathered hundreds of thousands  who were willing to brave the cold, walk shoulder to shoulder, and take a stand in peaceful procession to say, "Stop! Stop killing babies! Stop killing the elderly! Stop killing those with Downs Syndrome! Stop starving people to death because you think their life isn't worth living any more! Stop taking innocent lives!"

I remember Blessed Mother Teresa of Calcutta saying that although she lived among the "poorest of the poor" in India...she realized, in coming to the United States, that the truly poor are here...that we, who seemingly "have it all" have nothing if we do not value life...if our government sanctions the  act of mothers murdering their own children in the womb!

I remember her saying, further, "If you don't want your babies, give them to me...I will take them all".

I fully believe that Mother was sincere in her words...that she really would have taken each and every baby to care for them, love them, and treat them with the dignity to which she believed they were entitled as creations of God.

It pains me deeply to see how my country has fallen. I am ashamed that so many of my culture actually profess a "right" to kill...

It tears at my soul to watch fellow Christians...and more specifically, Catholic Christians...join forces with that mindset...How can this be?! What happened to the Commandment: Thou Shalt Not Kill?

Catholic colleges are losing their titles (and rightly so, in my opinion) for upholding a woman's "right to choose" rather than living out the Teaching of the Church.

This is evidence of the stronghold that satan has gained upon our American society.

He has worked his way into the hearts and minds of otherwise God-loving people through greed, selfishness, pride, and vanity. He has managed to convince mothers and fathers that the babies God is giving them are burdens, not blessings...he has managed to get them to agree that a nice home, an annual vacation, and a top-notch college education are more important than bringing forth new life for the Kingdom of Heaven. He has even found success in convincing those parents who already have children, that they can better care for those they have if they have no more.

My husband and teens, along with a full bus-load of others from our parish joined with hundreds of thousands in Washington who stood to say: "These are lies...tricks and snares of the devil that will lead our country to hell"
They took courageous stand....dared to be different..to raise their signs and lift their voices to make known to the leaders of America: "Life is sacred and you are not its Author! You are not free to choose who lives or dies...but all people, born and unborn...under our Constitution, have been granted and endowed by their Creator, an "inherent right to life, liberty, and the pursuit of happiness".
Babies are blessings!
Life is a gift!
And, this nation would truly be the greatest on earth if it were to return to those beliefs upon which it was founded!

Please offer a prayer today...that life will once again be held as sacred in this "land of the free and home of the brave".

I hope you will also pray for those who are contemplating abortion...and for those who have procured one or many and have lived to regret it...(Most women do live to regret it, you know)...these mothers need mercy, forgiveness, and hope...they need help...they need a reason to choose life when they have come to such a point of despair as to think that their child would be better off dead...they need to know that there are people out there who will help them, who will care for them...who will even take their baby, if needed, (like Mother Teresa suggested) and provide a loving home.

If you are contemplating abortion...please reach out for help!
If you have had an abortion and are hurting inside, there is healing and help awaiting you...contact:
RACHEL'S VINEYARD