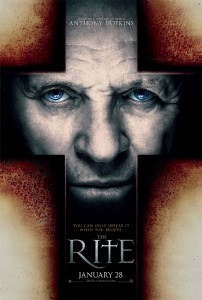 There will be two kinds of people that go to see the movie, The Rite, Warner Brother’s supernatural thriller about demonic possession; those that believe and those that do not.  But as Fr. Lucas’s warned his seminarian apprentice, “Choosing NOT to believe in the Devil, won't protect you from him."  And that, is ultimately what the movie is about--faith or lack thereof.

The Rite,  opens in theaters January 28. It is loosely based on true events chronicled in the book, The Rite; The Making of a Modern Exorcist by journalist Matt Baglio who followed the training of Fr. Gary Thomas in Rome to become an exorcist for his dioceses in the United States.  Fr. Gary was ordained in 1983 but his character is depicted by seminary student, Michael Kovak, played by Colin O’Donoghue who makes his screen debut.  Michael felt called to the priesthood but becomes haunted by doubt. His skepticism leads his superiors to team him with Fr. Lucas, an unconventional exorcist, played by Oscar winner Anthony Hopkins

When Michael witnesses behaviors during exorcisms such as guttural voices, knowing the unknown, speaking in languages the person never learned, vomiting nails, trances and bizarre physical contortions, he refuses to believe demonic forces are responsible. He be-friends Angeline, a journalist played by Brazilian actress Alice Braga, who is intrigued by the phenomena of exorcism.  Her own interest is compelled by a brother who was insane, or perhaps possessed, that committed suicide. Together, they confront their own demons, so to speak, as the veil between dimensions is ripped away.

Hollywood’s seeming obsession with exorcism was first born in 1968 with the movie Rosemary’s Baby, followed five years later by The Exorcist. Others followed but The Rite sets itself apart with a soul for realism. Yes, realism.

It was just such a revelation that leading man, O’Donoghue said challenged his own beliefs.  He explained during a press conference following the premier showing of the movie in Los Angeles, “I didn’t think it was going to be so intense.”   While on location in Rome, O’Donoghue and director Mikael Hafstrom spent time in the waiting room of an exorcist, sometimes hearing banging, strange voices, and crying on the other side of the door.

Later, on the movie set, after working on the most intense exorcism scene, O’Donoghue said he approached Fr. Gary. “I said to him, ‘Well this must be quite a Hollywood version of it, right?’ but Fr. Gary said, ‘No, everything that happened here, I’ve seen.’”

In spite of being a practicing Catholic from Ireland, like the character he plays, O’Donoghue said he had doubts about the authenticity of exorcisms. “I’m more convinced now,” he said. “When I was talking to Fr. Gary and another exorcist I met, they didn’t try to convince me of anything.  To them it’s real and their ‘take it or leave it’ attitude makes it more believable to me.”  O’Donoghue said his Catholic relatives need no convincing and thus, are not even sure if they will see the movie. “My grandmother said, ‘We’re delighted for you, but I don’t think I’ll see it.’”

It was Warner Brothers commitment to realism that convinced Fr. Gary to sign off on his character and work as an advisor.  When Fr. Gary was first approached, he was the skeptic.  “I don’t trust you,” he told the producer.  “Your industry hates the Catholic Church.”  He finally signed a contract but only after seven re-writes and restrictions placed on his character, and the requirement that Catholic teaching be accurate.

On the set, Fr. Gary helped coach Anthony Hopkins who plays the unorthodox, Fr Lucas, representing Fr. Gary’s mentor in Rome. “Hopkins was perfect for this role,” Fr. Gary stated. “He gives off a presence of awe and even looks a little like Fr. Carmine.”

Hopkins said, “This role really did grab me; I never played a priest before.”  However, he admitted that initially, he was put off by it. “I thought, oh, I don’t want to do another creepy movie. But my agent said, ‘You really ought to read it.’  I read it and told him, ‘Yeah, I nearly missed it.  It’s a really good script; excellent.’”

Hopkins said that playing this character touched him on a spiritual level. “Fr. Lucas begins to wonder, what is the truth?  He opens himself up to something in his own soul that he hadn’t thought about.” Hopkins said that he does not believe that people should ever think they have completely found the truth.  “Personally, I don’t believe in certainty,” he said. “I’m going to question the existence of everything.”   He did however admit to feeling certain about one thing: God. “I was an atheists over thirty year ago, I came into a context in my life that made me know without any doubt that I’m not enough; that there’s something much bigger than myself,” Hopkins said.  “It changed my whole life.”

While Hopkins is hesitant to lay claim to specific religious beliefs, he said he respects the beliefs of others.  “I stay open and become informed as an actor.  I think that is why I felt challenged by this part.”

The feeling of respect for the beliefs of others permeated the movie set, according to all the participants. Swedish born director, Mikael Hafstrom is from a Jewish and Protestant background but said. “I believe in believing and I respect other people’s way of finding inner peace.”

Screenwriter, Michael Petroni, who recently co-wrote The Voyage of the Dawn Treader, admitted that the subject matter was hard to shake off at the end of the day. “It definitely followed me home,” he said. “My wife was pregnant with our child and I was highly conscious of what was happening in my own home at the time. It is my nature to be interested in the spiritual side of life.” For Petroni, the movie was not just a story.  “It’s a presentation of a subject matter. If it creates a debate, that’s a good thing.”

The Rite is rated PG13. It has no blood or gore except for some blood in one possession scene. There are four profane words used by the demon during an exorcism.  Given the religious content, it is getting the attention of people that don’t ordinarily watch scary movies. If the devil scares you, then expect to be scared.   However, Fr. Gary sees The Rite as more than just a scary movie. On the last day on the movie set, he prayed with five of the actors and blessed them. Fr. Gary described the whole experience as fun but stated that for him, the greatest value is to get the message out that God is more powerful than the devil.

He said, “We should never fear this, what are you worried about? God is more powerful.  If there is a devil, there is a God and they are not equal.”