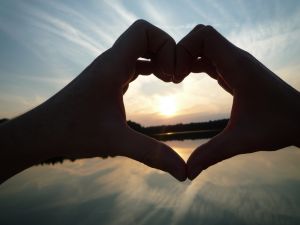 With Saint Valentine’s Day just around the corner, it makes good sense to share a little secret about well oiled marriages.  Haven’t we all seen enough magazine covers that include every promise to a happy and successful marriage?  They always miss this one secret…..small, yet a necessary ingredient along with many others.  Have you ever witnessed some great marriage and wondered how in the world they seem so in sync with each other, and wish they’d just tell you their secret?

I just happened to recently figure it out.  It only took thirteen years, but it was well worth the wait!  Let me set it up for you:

Recently, my husband and I have been working more closely on a few projects, and over the years, working together on things has given us mixed results.  Opposites really do attract.  And sometimes, strong willed opposites make for interesting dynamics when a project needs to be done together.  We have major differences in our styles of accomplishing a task.

He's a manager.  He's great at it.  He delegates, motivates, encourages and inspires.  Even his own employees would say the same about him, and have said so in the past.  I see it in our own home.  When I have a problem or need help, he'll first tell me how to do it, not necessary get in there unless I ask him to.

I'm a worker bee.  I'm in the muck of all the details of the every day.  I'm detailed oriented.  I research.  I prepare.  I am pro-active instead of re-active.

These two types of people, you would think, would work well together.  Not always so.

In past years, after having disagreement after disagreement on something, I'd make the final statement of, "Well, some married couples can't work on projects together.  We are just one of them.  We are NEVER doing this again."

But I am happy to report, the projects as of late, have been going well.  I think we just might have finally grasped the complicated dynamics that we bring to each project.  This time around we are remembering our sense of humor, and have been utilizing our strengths instead of forcing the other to conform to our own way of doing things.  And at the end of the day, we set aside the project, with a common phrase that says it all,  "Are you ready to quit for the day?"  And then after we agree, work is set aside, and then we are no longer co-workers, we are husband and wife.  The business is done. And while, ideally, there should be no difference, in a sense, there is.

It took some time to get here, to get to a place where I can see both of us maturing enough to respect our differences.  And - smart enough to start using those differences to our advantage, to move forward in projects, to praise each other in our strengths privately and publicly.

Take some of our recent major projects into consideration:
Clearing out the Basement:  That's wasn't just me.  He needed to help with the heavy stuff, or simply give his input on what to keep.
Major Purge Garage Sale:  Again, that's not just me.  He needed to be present and involved to ensure he sold his own items for the prices he wanted them to go for.  He was that male presence to help me and my sister feel secure with an overwhelming amount of strangers.
Start of Basement Remodel:  That is mostly him for sure, as I would definitely use the hammer and nail to destroy his good work.  But I am involved in the blueprint of design.

Lately, our projects working together are more school volunteer related, as we work managing the IT.

Recently, he led a very important meeting, that Babe and I had to attend.  For the most part, I only had to contribute minimally.  And so I spent the majority of the meeting watching my beloved.  Not just taking in what he was saying, but how he answered people's questions.  He used such tact.  He knew just how much that individual knew about the topic at hand, and adjusted his language in order to accommodate.  That's a gift!  It's such a gift especially when talking about technology.  It's moving so fast, that people are at different levels in their understanding.  Many still don't quite understand the vastness of the Internet and its capabilities.....its power...and its danger.

This is what I am talking about when I say, I think there's a level of maturity that we have finally found in each other.  I can sit and appreciate a great gift that he has in working through projects.  I am not in competition with him.  I support and utilize his strengths to get done what needs to get done.

In the end, an understanding was found at this meeting about technology, and how to use it to best benefit the school, for marketing, for communications and for networking in safe and secure ways.  And I largely attribute that understanding to my spouse.  He did that.  I watched him do that.  It was awesome.

He's a people person.  He can sense just what that person needs to hear, and in what way they need to hear it, to feel not only secure, but understood.  That's a great manager.

At one point in the past, I would never have left the meeting at any point, in case they covered something I needed to know or had to contribute to.  But - and this just shows me something personal - During that meeting, I took Babe to go potty....and I didn't have that twinge in the pit of my stomach, like I was missing something, or that someone might be throwing me under the bus while I was gone.  I was secure enough to leave for a while, to get Babe a drink and snack too.  We wandered back into the meeting after a bit, and I sat back in my conference room chair with Babe, and just relaxed.  It was all in good hands.

And...I'll tell you this.  It was teamwork, like I hadn't had in the past with him.  We were a united front.  There was no competition.  We gave side glances that spoke silent volumes about what needed to be said next to keep the meeting going in the right direction.  We had communicated, we were prepared.

We left the meeting and I not only felt that it accomplished so much.  I felt like we, as a husband and wife team, accomplished so much, in the marriage.  We learned how to be a team.  And that has to come first, I believe it.  To get anywhere, with less stress, with fewer disagreements, and all the while presenting a united front, you have to learn how to be a TEAM.

Finally, finally, I have figured out what it means when they say, "There is no 'I' in the word TEAM."

Am I Losing It?
Read
Infertility
Read
Icepocalypse
Read