Can I Have a Tantrum, Please? 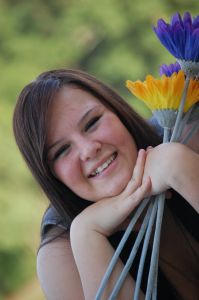 My husband and I are the parents of 3 wonderful children, well one is grown, married, and on his own, so he isn’t a child anymore.  But the two remaining at home are daughters and in their teens.  You got it, in their teens.  I swore that when they reached their teenaged years, we would not label them the dreaded “teenager” in a negative way.  Yep, well here we are and this label is unavoidable.  Mood-swings, temper-tantrums, and sullen eyes have been the norm around the house lately, all from me!

It all started a few years ago when sweaters were not fitting nicely on our eldest daughter, until I realized that she needed a bra.  What a different THAT made!  Shocked as I drove home to report that new development to my husband, who couldn’t believe it either.  “I’m not ready for this!” I told him, he just nodded in agreement.

Our son was fairly even-keeled, the only annoyance he brought to the teenaged table was his phrase, “I can handle it, Mom, I am 16 now!”  Driving infractions were peculiar at best; the funniest one was “Over-acceleration at stop sign”.  He was learning a stick shift and was still in the bunny-hopping stage.  He had his own job and I remember walking in the store he worked during his shift and being so pleased at how nice he was to customers and knowledgeable. Beaming, I sipped the sampling of coffee he fixed me as he trotted off to his work; Cost Plus World Market was a better store because of my son, I thought.

Girls, I have been told, are completely different with their own particular set of rules.  With having only one boy, I didn’t know whether we just lucked out, or if it was true that boys were easier.  We have two daughters, both are very different and I am beginning to agree with the above statement.  I love them both dearly, but there are days when I say to the youngest, “You, my dear, are a box of chocolates, I never know what I’m going to get!” Was that fair of me to say?  I’ll never know until she grows up if it traumatized her or just made her laugh at herself.  My husband still isn’t able to laugh yet.  “She treats me like dirt!” I found him moping one morning. “Well, she treats me like dirt, too, but you still have to say goodbye to her when she goes off to school in the morning!”  Be the bigger, I would say.  Easier said than done; most days I just try to love them as God does and leave the human emotions aside.  Do you know how hard that is?

I realized one day that having a tantrum, getting sucked into their moods is counter-productive.  Ok, so now I have realized what we need to do….is there a patron saint for parents with teenagers?