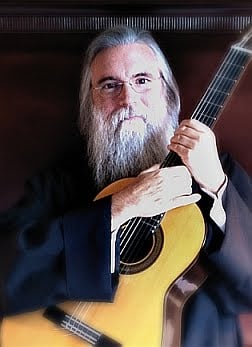 NASHVILLE, Tenn., Feb. 11, 2011 — The world’s most popular Catholic recording artist and one of the fathers of contemporary Christian music, John Michael Talbot, will be in Nashville February 14th through 18th recording his first studio project in over two years, "Worship and Bow Down."

Dubbed a "Techno-Monk," Talbot has successfully embraced technology, growing his Facebook fanbase to over 12,000 within the past year with over 2 million monthly views.

From the road or hermitage, Talbot posts several times a day from his iPad and iPhone to Facebook, always including his popular daily Gospel reflection. Talbot says Facebook is "like the two windows in the medieval anchorage: one to the church for Mass, and one to the world to minister. Facebook is a window to the world from my hermitage."

From February 14th through 18th, Talbot's "hermitage" will be the "Tracking Room" studio in Nashville where he will be co-producing the recording of his new CD. With over 4 million album sales, Talbot is very much at home in the recording studio and will be "opening the hermitage window" to this often private world, sharing pictures, stories and videos on his Facebook fan page throughout the week.

Talbot says, "Sharing the studio experience is a natural progression of my relationship with my Facebook community. We are all in this journey together and this is another way to break down walls and build dialogue through a shared experience."

For "Worship and Bow Down" Talbot teamed with the largest Catholic music publisher, OCP (Oregon Catholic Press). Targeted for a digital release this Spring 2011, the CD will include Talbot's "Contemporary Chant" setting for the New Roman Missal as well as original Eucharistic, Marian and Christian meditation hymns.

Facebook fans old and new are encouraged to stop by Talbot’s fan page frequently and take part in this unique opportunity. Visit

LINKS FOR THIS ARTICLE:
John Michael Talbot on Facebook