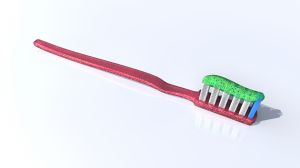 Healthy Gums, Healthy Heart
By Dr. Myron Wentz and Dave Wentz
Authors of  The Healthy Home: Simple Truths to Protect Your Family From Hidden Household Dangers
Did you know that a bright smile, with strong, healthy teeth, may be closely connected to a healthy heart? It's true. One of the most common dental problems today -- periodontitis, or chronic infection of the gums, more commonly known as gum disease -- is now closely associated with atherosclerosis, the most common form of heart disease.

Previously, it was thought that heart disease was caused almost entirely by a buildup of fats and other substances on the inner surfaces of artery walls. Eventually, the theory went, the deposit -- called a plaque -- would become large enough to completely block the artery, halting the blood flow that supplied oxygen and nutrients to heart tissue.

But new research has shown that heart disease isn't necessarily a plumbing problem -- it's an inflammatory disease.

Inflammation: The Good, the Bad, and the Ugly

Inflammation is the process by which the body responds to an injury or an infection. When the body senses an injury or foreign object, even as small as a bacterium, immune cells are called to the site through the blood stream. Several types of white bloods cells are activated to attack the invaders, and toxic chemicals are produced to neutralize the threat.

And unfortunately, especially in the United States, a common source of inflammation in the body is gum disease, a chronic infection of the tissue and gums surrounding the teeth.

Normally, with adequate dental hygiene, the billions of different types of bacteria that call your mouth home are kept under control, causing no harm. But poor dental habits can allow biofilms -- consisting mostly of bacteria -- to build up, forming a hard, dental plaque. The plaque irritates the gums, and eventually, pockets can form between the gums and the teeth. In time, these pockets can become deeper, with more bacterial accumulation. This causes infections that can not only cause the loss of gum tissue, bone, and teeth, but can also cause chronic inflammation within the body.

Gum disease doesn't get much attention from the media, and it's not on most people's radar, but it is a serious health problem. It's not an exaggeration to state that these infections present a significant risk factor for various systemic diseases in many countries around the world.

In the case of heart disease, we can hypothesize that the damaging effects of gum disease may begin when local inflammation exposes the mouth's underlying connective tissues and blood capillaries to the plaque biofilm. This could permit direct entry of the biofilm pathogens into the circulatory system, especially during eating and tooth brushing. Eventually, the periodontal pathogens would be able to migrate throughout the body, stimulating an inflammatory response wherever they go; reeking havoc on your entire body, including the heart.

Linking the Mouth and the Heart

Evidence has shown that species of bacteria normally found around the teeth are capable of penetrating the gum tissue to enter the bloodstream (i). In a 2009 study performed in Sao Paulo, Brazil, plaques from coronary arteries in 44 patients were surgically removed for analysis. Evidence of bacteria from the mouth was found in the heart tissue of more than 90 percent of patients with gum disease. (ii)

Numerous studies of the relationship between the two conditions provides a consensus that gum disease increases the risk of coronary heart disease by approximately 24 to 35 percent. (iii) Another study showed that the increase in relative risk of cardiovascular disease is higher -- 44 percent -- in people 65 and under. (iv) And severe gum disease has been shown to increase the risk of stroke by as much as four times. (v) These numbers take on greater meaning when you consider that 75 percent of adults in the U.S. suffer from mild forms of gum disease and more severe forms occur in 20 to 30 percent of adults.(vi)

There is even evidence that intensive periodontal treatment may reverse the risk of heart disease by restoring the elasticity of the arteries and thus improving their efficiency. (vii)

Keep in mind: circulatory diseases aren't the only chronic disorders closely associated with gum disease. Diabetes, respiratory infection, osteoporosis, Alzheimer's disease, and even cancer are now found to have inflammation as a significant component in their development. (viii)

So you now have more reason than ever before to make sure you brush and floss every day. When you look at yourself in the bathroom mirror and see either a toothbrush or a string of floss in your mouth, you can be sure that you're not only maintaining a healthy smile -- you're taking an important step in protecting your whole body, including your heart.

(i) Inaba H and Amano A. Roles of Oral Bacteria in Cardiovascular Diseases—From Molecular Mechanisms to Clinical Cases: Implication of Periodontal Diseases in Development of Systemic Diseases. J Pharmacol Sci 113:103-09. 2010.

(viii) Ibid 1.Dave Wentz is CEO of USANA Health Sciences, a company that specializes in nutritional supplements. Dr. Myron Wentz is a microbiologist and immunologist, and founded USANA in 1992. They are the authors of The Healthy Home, to be released March 22.
© 2011 Dr. Myron Wentz and Dave Wentz, authors of The Healthy Home: Simple Truths to Protect Your Family From Hidden Household Dangers

Author Bios
Dave Wentz , author of The Healthy Home: Simple Truths to Protect Your Family From Hidden Household Dangers, is chief executive officer of USANA Health Sciences, a state-of-the-art manufacturer of nutritional supplements and health products. He received a bachelor's degree in bioengineering from the University of California, San Diego. Dave lives with his wife, Reneé, and children, Andrew and Sydney, in Salt Lake City, Utah, where he enjoys skydiving, playing volleyball and soccer, mountain biking, and skiing Utah's famous powder.

Dr. Myron Wentz , author of The Healthy Home: Simple Truths to Protect Your Family From Hidden Household Dangers, holds a Ph.D. in microbiology with a specialty in immunology from the University of Utah. He founded Gull Laboratories in 1974 and developed the first commercially available diagnostic test for the Epstein-Barr virus. Later, he founded USANA Health Sciences and Sanoviv Medical Institute. Dr. Wentz was honored in June 2007 with the Albert Einstein Award for Outstanding Achievement in the Life Sciences. He is the author of A Mouth Full of Poison and Invisible Miracles. He travels the world with his lovely partner, Prudence.