The Grace Card: Movie Too Real for Hollywood 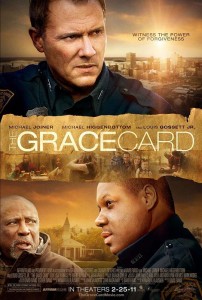 Filed under “Typical Media Bias Against Religion,” the theatrical release last week of the cop drama “The Grace Card” garnered this one-line summary on the movie site Screenit.com: WILL KIDS WANT TO SEE IT?

The site rates “The Grace Card” as “heavy” in violence, guns/weapons, frightening/tense scenes, and scary/tense music. It’s “extreme” in disrespectful/bad attitudes and family tension; “moderate” in alcohol/drugs and blood/gore; and “mild” for profanity and sexual scenes.

Another new release, “Unknown,” starring Liam Neeson, ranks similarly in most areas above but also is “heavy” in profanity and sexual scenes/situations. For that film, Screenit.com answers the question about kids’ interest thusly: “Those who are fans of older-skewing action pics (such as ‘Taken’) may be interested, as might fans of anyone in the cast.”

Huh. I guess action movies are more interesting when God is not in the cast.

“The Grace Card” is a typical Hollywood cop flick — except that in this film, one police officer is also a black Christian minister who preaches on the weekends and his partner is an angry white man who resents God and people of color.

In other words, in addition to the gritty, uncomfortable, sometimes violent issues facing law enforcement officers, these characters bring a realistic, spiritual dimension to their story, including the powerful experiences of redemption and forgiveness.

But rather than earn widespread praise for offering a compelling portrait of the human experience, “The Grace Card” is merely labeled a “Christian” film. And of course, only Christians would want to see a Christian film, right?

Maybe not. On its opening weekend in limited release, the film grossed more than $1 million playing on only 352 screens, earning a higher per-theater return than the Nicholas Cage action/stinkbomb, “Drive Angry.”

As for the film’s Christian message, “Grace Card” star Michael Joiner asserts that all movies carry a specific message intended by the director or producer. “You’re getting preached to one way or the other,” he says. “It’s just that when Christians do it, they call it proselytizing. But Hollywood preaches all the time.”

Mr. Joiner believes there is bias in Hollywood — “a bias for making money.”

“You can make a movie with a good message as long as it’s profitable,” he says. “Christians have to realize that quality is vital.”

A Christian and well-known “clean” comedian, Mr. Joiner says he went to Hollywood to become an actor, not to become a “Christian” actor.

“I want to make quality films,” he says. “Even God wants no part of a bad movie.”

Mr. Joiner also struggles with those who insist that a religiously themed movie must be overtly doctrinaire. “There are people who think this film isn’t ‘Christian’ enough,” he says. For example, some religious viewers have criticized the film because it never mentions the name of Jesus. Mr. Joiner, ever the comedian, jokes, “I tell them, you know, that’s the same reason I won’t read the Old Testament.”

More important, Mr. Joiner says, is to make films that “plant seeds. You can’t appeal to the unchurched if you hit them over the head.” Better to make interesting, entertaining films that also infuse a thoughtful, inspiring message, he contends.

In a nation where more than 90 percent of citizens profess to believe in God and 83 percent say the God they believe in answers prayers, there ought to be a market for quality films with pro-religious messages. Yet where faith is concerned, if it’s ever depicted, it typically is portrayed as a journey away from God, and certainly away from organized religion.

Perhaps “The Grace Card” will prove there’s a role for God in movies after all.