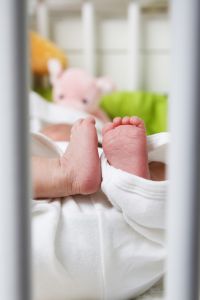 Age should not be a determining factor when considering children. I know that statement is controversial. Believe me, I know, I know, I know. After all, a 44-year-old pregnant woman gets an earful. When I was pregnant again at 47 (unlike my 47-year-old cousin who was pregnant at the same time and happily gave birth), I can only imagine what the comments would have been had I not miscarried.

Family planning is a huge and emotional topic but I am going to confine my observations to just the age factor. It seems that most people in this world consider age to be worthy of consideration when deciding whether to be open to life. My point is that age should have no bearing on such a decision. For the record, if you have a deteriorating health condition that worsens with age, I don’t consider that an age factor but a health factor.

My husband Mark and I began having children at 27 and 26 respectively. Today, at 54 and 53, our youngest boys are 9 and 11. (No grandchildren or marriages yet.) Many among our peers had young ones when we did, became empty nesters and now have grandchildren. Others that remained open to life, have young ones and grandchildren at the same time. I don’t presume to EVER judge a person by their family size. I know many couples that wanted more and could not have them. Also, Mark and I were clueless on family planning issues for the first years of our marriage so it would be hypocritical to condemn others for the same thing.

I address this article to those that claim age is a legitimate reason to stop having children. The rule of thumb in our modern world is that once you have a child, you count 18 years to figure out how much longer until you are free again. Even people that adore their children do this. The problem with connecting childbearing with the numbers is that eternity is never factored in, only retirement. People tragically count the golden years of retirement, complete with travel and ease, as part of their due in life. Young children during this time interferes with such a plan. This vision values a few years on the road in a recreational vehicle or cruise ship as superior to another soul. Such a determination is purely worldly for nothing trumps a soul.

When pregnant with my eight child, I was browsing at a rummage sale and overheard a conversation between the two women in charge. Selling off children’s clothing has a way of tugging at a mom’s heartstrings.

One woman said, “For a while, I really thought of having a third baby. It’s so hard to see them grow. But then my husband said, ‘What about us? When will it be our time?’ I realized that he was right.” Her friend agreed wholeheartedly to which woman #1 added, “Yeah, if I had another one, then when that one got older I would have probably wanted another one and then...well, when would it have stopped?”

My urge to say something was overwhelming. I said a prayer and felt that it was my place to keep my mouth shut. It would have been so easy for me to pipe in, “I know what you mean, this is my eight baby. They are such a blessing, you really would have wanted to keep having them.” I’m guessing it was too late for this women who was preparing for an empty nest. She had buried her desire for more children, and I felt directed to just pray for her rather than pain her with smugness.

Old is a State of Mind

For women, childbearing is intimately linking to age. A girl’s first menses opens up the possibility of motherhood while menopause closes it. A friend who was expecting her seventh child once told me that someone had said, “Aren’t you too old?” We both laughed because if she was “too old” she wouldn’t be pregnant. It’s only worldly considerations that have redefined what “too old” is to be a mother.

I once struck up a casual conversation while sitting next to a mother at a playground. She revealed that her third child was born when she was 40. When her doctor learned she was pregnant, he suggested an abortion, for no other reason than her age. I kid you not. It seems that outside of celebrity moms that earn a place on the cover of magazines for getting pregnant after 40, the rest of us--especially if we already had children earlier in life--are pitied or scorned.

I am here to tell you that having children later in life is a blessing. It also helps keep a woman young in more ways than one. Aside from the fact that I would not still be sledding and flying kites with my kids, I’ve heard reports that I am physically younger as a result of late childbearing. One day during my seventh pregnancy, (age 42) I was watching the evening news while exercising on my stationary bike. It was announced that a study on older moms showed that women having children later in life actually aged at a slower rate. Well, what do you know, I thought happily. Doesn’t it figure that God would take care of the details. I’m sorry that men were not included in the study so I can’t address that aspect.

A few years later, my then-teenage son Jacob and I were watching a program on centurions (people that have reached 100 years old). It was stated that a factor common among the women is that many had children later in life. Jacob laughed and said, “Well mom, looks like your chances at living to be 100 are pretty good.”

Looking at the Odds

To be fair, if you just look at the odds, it is true that the older a person gets, the greater the mortality rate among peers. Living to a ripe old age is not something we can expect. Christians know well that we are to be ready to meet God every day of our lives since the end can come at any time without notice. Parents do die leaving young children.

Age, however, is not the only killer. Parents in their twenties and thirties are known to die, leaving children behind. Does that mean those children would be better off if they had never been born? This consideration hits home in our family. My husband’s brother died of a heart attack two months ago at the age of 52. He left two older children and one that is just twelve years old. My husband is now age 54. Since heart attacks run in their family, my brother-in-law once stated to Mark that age should be considered when having children due to the known genetic risks in their family. We decided it would not be a factor in our own consideration.

I trust that no one thinks it would be better for my nephew not to have been born now that his father is gone. Mark and I decided that God knows our situation and we would not second-guess Him on when He will call Mark home. Not having more children in case you die, is playing God. Is it possible Mark’s life has been extended because God is keeping him here while our kids our still young? We have no way of knowing why Mark did not have a heart attack at 52 unlike that past 3 generations of Armstrong men. Nor can we assume he will live long enough for all the kids to be grown. We simply live for today with our eye on eternity. Our decision to have more children was based on the fact that they are eternal blessings and we trust that God is in control of our lives.

Pope John Paul II summarized the Church's teaching on having children in 1994. He wrote: "In deciding whether or not to have a child, [spouses] must not be motivated by selfishness or carelessness, but by a prudent, conscious generosity that weighs the possibilities and circumstances, and especially gives priority to the welfare of the unborn child.”

Pope Paul VI helps us define what such a reason not to have children might be. In "Humanae Vitae" (No. 16) he teaches: "If therefore there are 'iusta causae' for spacing births, arising from the physical or psychological condition of husband or wife, or from external circumstances, the Church teaches that married people may then take advantage of the natural cycles immanent in the reproductive system...”

It is dishonest to consider age to be one of the external circumstances that justifies being closed to life. God already has our back on that one. Women lose the ability to bear children as they age, lest they start dabbling in hormone/fertility therapy. I’m not even going to go there on that one other than to say, women’s fertility is in union with the rest of their aging body. Fertility treatment that allows women to conceive past menopause is not the fountain of youth that erases all other physical realities.

As the years pass, I’m going to get older either way. I could have grown old with less children. If I imagine the last four having never been born, my life would have been dramatically different. There would be more time to pray, write, exercise socialize and read--things I love to do. But envisioning the non-existence of the youngest four (that’s what it would take to make us empty-nesters) does not give me an image of a fuller or better life.

Yes, there is more expense and more work in some ways--okay, a lot of ways. But as Christians, we all believe that it is God that measures our crosses. Could it be that if Mark and I had opted not to bring more children into this world, that God would have put other burdens on our shoulders? Would those burdens have been less rewarding than the burden that comes with the work of bringing little souls into this world?

A couple’s fertility is indeed between the couple and God. I only caution not to play God in such a determination. Age, like this world, is a passing thing. I know there’s no time in eternity, but for the sake of argument, let’s imagine being 550 years old in heaven. Will their be a downside if our youngest child (also hopefully in heaven) is only 505? Of course not.