Go and Tell Someone 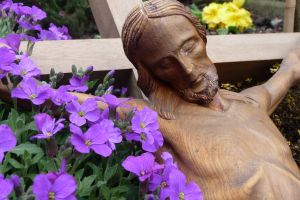 One of my joys being a deacon and involved in new media work is the Catholics I’ve met or developed internet relationships with. Some I’ve met in person -- like dear Lisa Hendey, Fr. Jay Finelli, the iPadre, and within the last year, Bob D’Aurelio who does the Paul’s Men Podcast. Others are solid e-friends but ones whom we have come to care for, pray for and hope to meet in person.

My wife Dee & I recently had a long lunch with Bob and Eileen D’Aurelio. It was a couple hours of good bonding which included a visit to our home. I happened to notice that Bob is outwardly wearing a crucifix -- not an insignificant little piece of jewelry. It’s a real, noticeable cross and Bob is making a quiet statement by committing to wear this: “I am a Christian and I will act like one.” I’m sure people put him in a box or some corner of their mind as soon as they see him and his cross. That cross probably effects the way people act towards and with Bob; it most surely effects the way Bob acts and presents himself.

This reminds me of the Irish priest we had in Florida who talked about what it was like in the 1980’s to put on one of the WWJD bracelets. What Would Jesus Do? Put one of those on -- and talk about being put into a box or a corner. I’ll say.

I think there is Scripture which says, “let the redeemed of the LORD say so, whom he has redeemed from trouble.”

And somewhere, I read that a Pentecostal preacher in one of his preaching efforts remarked how Jesus told some that He had cured to ‘go and tell no one.’ The preacher said that this is one command many (most?) Christians are careful to obey. A sad commentary, with more than a tinge of truth.

Considering that thousands upon thousands have died as a public witness to the faith they professed, what is it that’s happened to us Catholic Christians? Most especially we Catholics who profess to believe that we have the fullness of truth? Why are we fearful or embarrassed or uncomfortable about sharing much evidence of what is supposed to be the Good News?

I’ve been thinking about this and wondering if there isn’t a Lenten challenge to consider in this? What would you be willing to do? There is a Catholic goods company that 2 inch by 8 inch signs that proclaim “This is a Catholic Home.” Would you consider putting that on or next to your front door? Would you consider obtaining a Mass card and sending it for a sick non-Catholic friend? Would you consider starting a rosary in the home effort in your neighborhood? Neighbors would slowly see your gentle witness in any of these.

We have Lenten Stations of the Cross each Friday afternoon in our parish. This is followed by a Lenten soup and bread supper with 7 or 8 crock pots of different meatless soups. Would we be willing to invite a Protestant friend to join for either or both the Stations or the soup event in our parish hall?

I didn’t set out intent on bringing up anything related to politics or current events in this column. But if you think about the shredding of the idea of marriage as between one man and one woman, and if you think about the absolute tripe and filth depicted on sitcom TV programs, and if you know that condoms are being given to school kids in the name of safe sex (which is really an invitation to casual sex).... then what are we giving witness to by our quiet?

Today is a good day to give praise and make a little noise about what we believe in. Do we have the courage of our convictions to go and tell someone? Anyone?