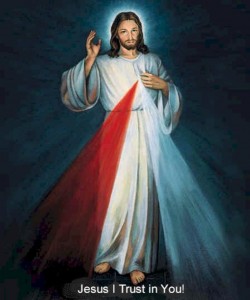 We live in trying times. Terrorism from both jihad and abortion clinics is but one indicator that shows what a merciless and age we live in. But as evil and terror has increased, so too has the reach of God’s mercy.

The devotion of Divine Mercy was given to the World just before World War II where 50 million died, through a young nun in Poland.  Sr. Mary Faustina Kowalska was born in 1905, in Glogowic, Poland. She came from a poor peasant family, the 3rd of 10 children. Even as a young child, she loved prayer and work and was kind to the poor.  At the age of sixteen she left home and went to work as a housekeeper, supporting herself and helping her parents. Then, on August 1, 1925 Sr. Faustina entered the Congregation of the Sisters of Our Lady of Mercy. She lived in the congregation for thirteen years where she worked as a cook, gardener and porter, humbly performing her tasks. Her deep reflections on God's mercy helped develop the attitude of child-like trust in God as well as mercy toward her neighbors. Although on the outside, her life appeared insignificant, she hid within herself extraordinary spiritual gifts, which included revelations from Jesus.

Sr. Faustina kept a record of her spiritual journey at the request of her superior and of Jesus. Her writing was published as The Diary of Saint Maria Faustina Kowalska: Divine Mercy in My Soul.

The mission of Sister Mary Faustina consisted of 3 tasks:

– Reminding the world about the merciful love of God toward every human being that is revealed in the Holy Scripture. The message of Divine Mercy is not a new because it is at the heart of the Gospel.

– Relying on God's mercy for the whole world especially for sinners through the practice of new forms of devotion to the Divine Mercy such as: the veneration of the image of the Divine Mercy with the inscription: Jesus, I Trust in You, the feast of the Divine Mercy celebrated on the first Sunday after Easter, praying the chaplet to the Divine Mercy and prayer at the Hour of Mercy (3 p.m.).  There were great promises attached to the above forms of devotion, provided one entrusted one's life to God and practiced active love of one's neighbor. Jesus said: “The graces of my mercy are drawn by means of one vessel only, that is trust.  The more a soul trusts the more it will receive.  Sooner would heaven and earth turn into nothingness than would my mercy not embrace a trusting soul.” (VI 129)

“You are to be my living reflection through love and mercy, be always merciful toward other people, especially toward sinners.” (V.59) “Love everyone out of Love for Me.” (VI.68)

-- The third task assigned to Sr. Faustina was to promote the Divine Mercy devotion, which proclaims God's mercy for the world and strives for Christian perfection through an attitude of child-like trust in God as well as mercy toward one's neighbors.  “Souls who spread the honor of my mercy I shield through their entire life and at the hour of death I will not be a judge for them, but the Merciful Savior”, (III.20, 21.)

Sister Faustina accepted innumerable sufferings as a voluntary sacrifice for sinners, and died of tuberculosis at the age of thirty-three on October 5, 1938. The reputation of the holiness of her life grew as did the Divine Mercy devotion.  Her life was investigated and on April 18, 1993 Pope John Paul II officially canonized Sister Faustina a saint. The Feast of Divine Mercy was also declared as the Sunday following Easter, which is now known as Mercy Sunday. Today, this movement has spread to millions throughout the world including religious congregations of priests, nuns, brothers and lay institutes, as well as individuals who help spread the mission. The Diary has been translated into many languages, among others, English, German, Italian, Spanish, French, Portuguese, Arabic, Russian, Hungarian, Czech and Slovak.

Over and over again, Jesus expressed His desire to St. Faustina that the whole world be convinced of His mercy. Pope John Paul II, in a homily on Divine Mercy Sunday, proclaimed:  “The Mystical experiences of Sr. Faustina and her cry to the merciful Christ belong to the harsh context of our century.” Divine mercy fits into our time of lack of mercy with terrorism and lack of respect for life.

Today’s world distracts people from the reality of eternity and people often live as though this is all there is and turn their conscience away from God. Divine Mercy teaches that although God is merciful, He does care that we sin. We are called to a real repentance. Psychology often teaches that pleasure should be the guide of right and wrong but psychology is not religion. We are required to follow the law of God. Part of God’s mercy is that when we experience sorrow for our sins, instead of feeling hopeless, we can receive forgiveness and healing.

Sister Faustina recorded in her diary:  “I saw Jesus dressed in a white garment.  He held one hand raised in blessing and the other hand was touching his garment at the breast. From under the garment came two rays of light, one red the other pale.” Jesus asked that a picture be painted of this image with the words under it: Jesus I Trust in You.  He asked that the picture be venerated first in the convent chapel and then throughout the whole world.

Jesus explained the meaning of the rays from his heart: “The rays represent the Blood and water which gushed forth from the depths of my Mercy when my agonizing heart was pierced on the cross. The pale rays symbolize the water, which cleanses and purifies the world: the red rays represent the blood, which gives new life to the soul.  These rays will shield the soul before the justice of my Father. Fortunate are those who live in this shelter, for the justice of God will not reach them there.”

St. Fuastina wrote: “The Lord permitted me to see the immensity and greatness of His Mercy.  If souls could only realize how much God loves them!  Earthly human understanding is only a pale shadow of the reality.”  Jesus pleaded for the return of all who have lost their faith and offended God.   “Write, the greater the sinner, the greater the mercy.  Summon all those to confidence in the incomprehensible depth of my mercy for I desire to save all.  The well of mercy was opened wide with a lance on the cross for all souls.  I do not exclude anyone.”

Jesus repeated again and again His appeals to sinners. “Know my daughter that my heart is mercy itself.  From this sea of mercy graces pour out upon the whole world.  No souls that come to me depart without being comforted.  All misery vanishes in my mercy and every grace, redemptive and sanctifying, stems from this source.”

Jesus complained of a lack of trust. “Distrust tears at my heart.  The lack of confidence in chosen souls hurts me most. Despite my exhaustive love, they do not trust me.  Tell ailing mankind to draw close to my merciful heart and I will fill them with peace.  Mankind will not find solace until it turns with confidence to my mercy and love.”

On September 13, 1935, Sister Faustina saw an angel as the executor of God’s wrath about to carry out punishment on the inhabitants of a city.  While she prayed, she heard these words: “Eternal Father, I offer you the body and blood, soul and divinity of your dearly beloved son, Our Lord Jesus Christ in atonement of our sins and those of the whole world.” This prayer had the power to stop the chastisement.  Jesus explained to St. Faustina that he wished this prayer to be said on ordinary rosary beads. “Say unceasingly this chaplet.  Anyone who says it will receive great mercy at the hour of death.  Priests will recommend it to sinners as a last hope.  If the most hardened sinner recites this chaplet even once, they will receive grace from my infinite Mercy.  I want the whole world to know my infinite mercy.  I want to give unimaginable graces to those who trust in my mercy.”

Jesus asks that the Feast of Mercy be preceded by a novena of the Chaplet of Divine Mercy to beseech the Father for mercy through the bitter passion of Jesus for the conversion of the whole world. It is to begin on Good Friday. A great grace has been attached to the celebration of the Feast of Mercy. Jesus said:  “The soul that will go to confession and receive Holy Communion shall obtain complete forgiveness of sins and punishment.” (II.138) Confession can be made within either the week prior or afterwards. Also, people are expected to participate in mercy in our own lives as part of the preparation.  We should be merciful to others in our words, prayers and deeds.

Just as Our Father in Heaven is merciful, Jesus demanded mercy from us in return.  “Be merciful even as your Father is merciful.” (Luke 6:36)

“Blessed are the merciful for they shall obtain mercy” (Mt. 5:7)

Trust in Jesus and showing mercy toward others is the core of this devotion.  It is part of living the gospel message and it is transforming.  Love of God demands love of neighbor. “Whatever you do for the least of my brothers, that you do unto me.” (Mt. 25:40)

Mercy towards others helps us to regain the dignity of the children of God who have sinned and fallen short.  Our mercy towards others comes from the love in which we raise them up by respect and charity.  In this way, we help others to realize their own dignity and through our example we spread the Divine Mercy message. We can show mercy in word, deed or prayer.  In the end, we receive mercy through God’s love, which spreads.