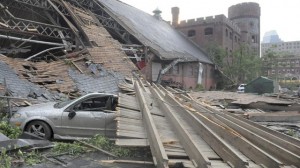 Editor's Note: We are so happy to hear that Patrice and her family are safe after last week's tornado. Many families are suffering from the devastation left in the wake of the storm. To support them, see Patrice's instructions for donating to the American Red Cross below. LMH

On the afternoon of June 1st, my hometown of Springfield, MA was hit by a F3 tornado. Many other local towns and cities were hit as well. New England isn’t known for its tornadoes. Blizzards? Yes. Tornadoes? No. Yet, remarkably, there was relatively little loss of life. While the few that were lost will be deeply missed, the toll could have been much worse. Yet, the physical and psychological damage will take a long time to recover from. The initial shock has worn off now. The reality has begun to sink in.

My home was unscathed. Our biggest issue was loss of power for a day. We were incredibly fortunate. Less than two miles from me, streets are closed and whole houses are missing. The world outside my window is peaceful. Life for us goes on. Yet, so many of my friends and neighbors are hurting.

It seems like every day there is news of a tragedy. It is easy to gloss over. We may sympathize. We may even donate money to help. But there is no great impact. It is very different when the tragedy hits home. As my local newspaper stated, “life changed in a minute.”

I cried as I read the stories and viewed the photos of the destruction in the newspapers. These weren’t unknown photos. These were people and places I knew. The National Guard was brought in to help keep the peace and prevent looting. The city was shut down.

After staying close to home the past few days, I ventured out today. To see so many houses marked as condemned is heartbreaking. Cathedral, our local Catholic High School, was destroyed, as was the Catholic Middle School. Several other schools suffered considerable damage as well.

As is often the case, tragedy often brings out the best in people. So many have volunteered to help, people were being turned away. Neighbors were helping neighbors clean up. Electrical workers labored around the clock to get power restored as quickly as possible. At Mass, we prayed and collected money for our fellow parishioners who had lost so much. Fundraising drives and collections of goods are taking place everywhere. Outside a home marked “condemned” was a huge sign thanking all the emergency personnel who helped so much. Local colleges have stepped forward, offering spaces to the closed Catholic schools.

Still, there is much to be done. I know many of you will see this article and move on. After all, it isn’t your home, or your neighbors, and there are so many hurting people in the world. One can’t help all of them. But, if you are still reading, I would ask you to first, please take a moment to offer a prayer for those who are suffering as they attempt to rebuild their lives. Second, if you are able to donate, please send a donation to: American Red Cross Pioneer Valley Chapter, 506 Cottage Street, Springfield, MA 01104. It will be greatly appreciated. Thank you.