The Shining Jewels of My Faith 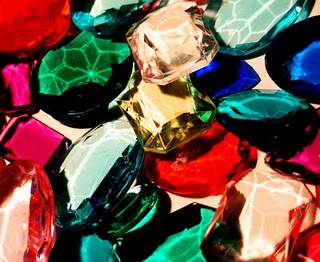 The journey toward a worldview oftentimes comes in stops and starts, but at some point we find ourselves firmly entrenched in the particulars of a certain approach to the world. Below are some of the shining jewels that have sparkled along my path, compelling me more assuredly toward Christianity in general and Catholicism in particular.

I’ll start with Christianity in general. What keeps me here and so solidly?

1.  The Founder. Christianity is the only major world religion whose founder claims to be not just a prophet but God himself. A bold claim that if true (as I believe it is) changes everything.

2. Evidence. Though hotly contested, the evidence in favor of Christianity is everywhere. Some have been blocked for one reason or another from seeing it – a subject for another post, perhaps. But just because some hearts have been closed to the evidence doesn’t mean it’s not there -- and compellingly so.

3. Love. No matter what those on the outside say about the reality of Christianity, from my inside view, love has been and continues to be the overriding draw and reality of the Christian faith. That’s not to say all Christians love perfectly. But the major tenet of Christianity is love, as well as forgiveness (something not taught by other religions in quite the same way). Jesus’ primary purpose in dwelling among us was to teach us to love with more depth. I firmly contend that those who read the Bible and don’t come away with love as a central and vital message have somehow veered off course and missed the main point.

Now for Catholicism, and since it seems to work well, I’ll stick with a trio:

1.  Apostolic Succession. This is one of the teachings of Catholicism that drew me back most assuredly during what I would call my reversion. Stumbling upon the reality that Jesus gave Peter the authority to build His Church on earth, and that Peter is our first pope, and an unbroken line of popes has existed from that point until our current pope, was fascinating to me. It kept me firmly pulled in the direction of Catholicism and influenced my husband’s conversion as well.

2. The Eucharist. Catholics believe that one of the gifts Jesus gave us before returning to His Father was the Eucharist. We believe that at each Mass throughout the world, every day of the year, Jesus comes to us again in a special and intimate way in this most priceless gift of himself – body, blood, soul and divinity. It isn’t a symbol but truly God in the form of bread and wine. This is an abundant source of grace and a true treasure of Catholicism that brings new meaning to the decision to attend church regularly.

3. Truth/Beauty/Goodness. Truth, beauty and goodness can be found everywhere in the world but are manifest is a special way within the Catholic Church (and, I believe, all Christian churches). No matter how diligently some work to discredit the Church, truth, beauty and goodness will continue to shine within its doors, as well as within individual hearts the closer one draws to God. The more I’ve come to truly understand Church teaching and how God’s love is manifest to us through it, the more I’ve been drawn to these three realities, and I find them particularly brilliant within Catholicism.

Q4U: Thanks for the chance to share what keeps me close to my faith. I look forward to reading your thoughts about what draws you to your worldview.