Does It Matter Whether or Not Pope Benedict XVI Tweeted? 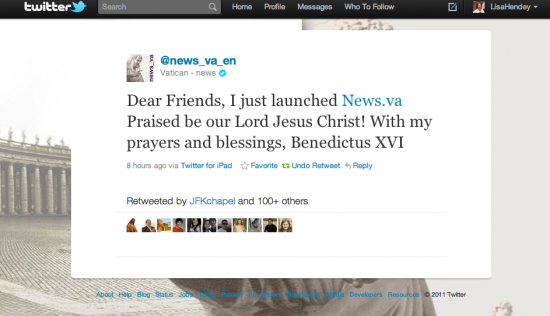 Those in Catholic social media spheres have had a blast this week watching the much anticipated launch of the new News.VA portal. If you were paying attention on Tuesday, you may have been one of the very first visitors to the new site, which features a broad spectrum of social networking platforms, YouTube videos, official Vatican press presence online and much more. 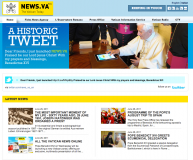 Much was made of the fact that Pope Benedict XVI officially launched the site from an iPad, also sending the first official papal tweet to announce the Vatican's latest entry into the social media world. The video below shows an intimate look at that moment. It truly brought a smile to my face to see our Holy Father tentatively click the iPad much the same way I've seen my own 70-something year old Mom do with her iPad.

Obviously, there was an incredible amount of work that went on behind the scenes to prepare for that moment. Does it matter whether or not Pope Benedict XVI personally typed the Tweet or really did hit "publish" to launch News.VA? In my mind, no. A few hours after the launch, I was kindly contacted by Carl Franzen, a terrific reporter for the iPad journal The Daily. Carl and The Daily were doing research for this story on the launch. I wanted to thank my friend and fellow writer Meredith Gould for underscoring why social media is so important to the Church in her remarks in the story. Since my comments didn't make it into the article do to space constraints, I thought I'd share with you here what I told Carl:

"Although I doubt that Pope Benedict XVI personally composed the tweet, I do think that his actions today send a strong message that the Catholic Church is looking to embrace social communications to spread the Gospel, to communicate with Catholics and those interested in faith topics around the world, and to support families who are seeking to raise faith filled children in today's technological age. I think Pope Benedict XVI has assembled a staff that recognizes the importance of using the latest communications tools and that the tweet today sends a strong signal that the Church is committed and looking to the future."

I've had fun poking around on the new website. I think it will be a terrific resource for our Church and I do believe it sends encouragement to those of us who are embracing digital technology to support and encourage families. I'd love to hear your thoughts on this topic: does it matter if the Pope tweeted himself? What do you think of the new site? What support would you like to receive from the Church in raising your family in today's technological climate? Chime in below in the comments.