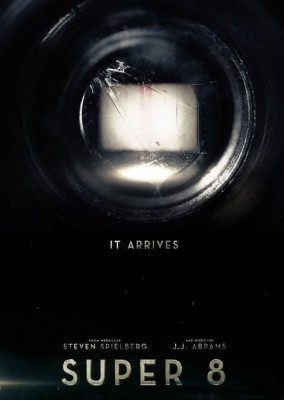 If you're a fan of LOST, J.J. Abrams or any of the classic Steven Spielberg films, it's likely that you'll love Super 8. Let me say up front that despite the adorable cast of adolescent actors that truly make this film, it's sadly not suitable for children. The film earns its PG13 rating and an AIII from the USCCB for intense violence, graphic language and drug usage. While the action scenes in the film are never overly gory, they may often prove too intense for younger children.

And that's truly a shame, because many of the themes explored in Super 8 are full of faith, hope and love. Funny that I'd walk out of a sci fi alien disaster flick inspired, but that's exactly how I felt as the ending credits rolled - and just a quick hint: stay through the credits for a delicious dessert of imagery you'll love.

Super 8 centers around a cast of middle school friends who are spending their summer working on their friend Charles' entry into a local film competition. As filming gets started we meet main characters Joe (Joel Courtney) and Alice (Elle Fanning), whose budding friendship is at the center of many of the redemptive themes in the movie. Sadly, Joe has lost his mother in a plant accident, and Alice feels partially to blame since her father (the town loser) was too drunk to work the shift during which Joe's mom tragically lost her life. It doesn't help that Joe's father Jack (played by one of my favorite actors Kyle Chandler) is barely hanging on by a thread and wants to send Joe to baseball camp for the summer.

Set in the late 70's, the film took me back to my own romp through those difficult years of growth, the promise of independence and the awkwardness of youth. The young friends happen to witness a truly shocking accident involving a military/alien mystery and the audience watches as mayhem ensues in their small Ohio town. After the disappearance of the town's sheriff, Joe's dad Jack must step up to figure out what's really going on around town, but the kids are the ones who truly hold the keys to the mystery.

A beautiful score by Michael Giacchino, classic period imagery, and a story of redemptive love come together to make Super 8 the best film I've seen this summer. I do wish they could have dropped the dopey marijuana scenes and the one "F" bomb to have made this something a whole family could enjoy together. But for families with older teens looking for a fun film to enjoy together, I give Super 8 my highest recommendation.