What makes a beautiful Godly woman - The way of beauty 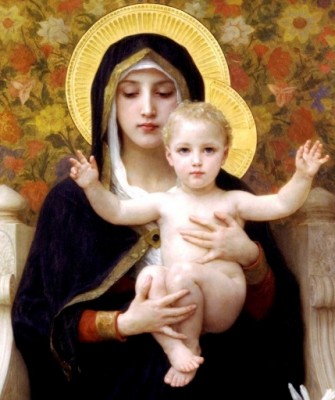 In the last post I talked about holiness and how it creates an inner light. Mary was holy and she had that inner light. She must have been so beautiful to behold. That inner light, that holiness, made it possible for her to accept God’s will without question. Yet there must have been some preparation in her life for that moment. A farmer doesn’t just drop seed on the ground - it wouldn’t grow. The ground has to be prepared, tilled, aerated, watered . . . so that the seed can germinate and grow. How did Mary prepare? How can we prepare?

Tradition has it that Mary was raised in the temple. Certainly in the temple she was trained in prayer and scripture. She likely had a thorough knowledge of the prophesies regarding the Messiah and was obviously grounded in prayer. Notice that the angel Gabriel did not need to explain much to her for her to understand the implications:

Now in the sixth month the angel Gabriel was sent by God to a city of Galilee named Nazareth,to a virgin betrothed to a man whose name was Joseph, of the house of David. The virgin’s name was Mary. And having come in, the angel said to her, “Rejoice, highly favored one, the Lord is with you; blessed are you among women!”

But when she saw him,she was troubled at his saying, and considered what manner of greeting this was. Then the angel said to her, “Do not be afraid, Mary, for you have found favor with God. And behold, you will conceive in your womb and bring forth a Son, and shall call His name JESUS. He will be great, and will be called the Son of the Highest; and the Lord God will give Him the throne of His father David. And He will reign over the house of Jacob forever, and of His kingdom there will be no end.”

Then Mary said to the angel, “How can this be, since I do not know a man?”

And the angel answered and said to her, “The Holy Spirit will come upon you, and the power of the Highest will overshadow you; therefore, also, that Holy One who is to be born will be called the Son of God. Now indeed, Elizabeth your relative has also conceived a son in her old age; and this is now the sixth month for her who was called barren. 37 For with God nothing will be impossible.”

Then Mary said, “Behold the maidservant of the Lord! Let it be to me according to your word.” And the angel departed from her. (Luke 1:26-38)

Mary only asked one question - how would it happen? She understood the rest. The lifelong cultivation of her spiritual life through consistent prayer and study of scripture had prepared her to hear the words of Gabriel and accept them. Her eyes didn’t need to be opened by any explanation - they were already open.

Keith Fournier in his book, The Prayer of Mary, (chapter 2, The Way of Beauty, pages 9-14) maintains that Mary was beautiful because she grounded herself in this lifestyle. The angel declared that she was “full of grace” and Fournier says that makes Mary “beautiful.” She radiated a deeper, spiritual beauty flowing from her relationship with God (remember my example of our new real estate in the last post?). This inner glow was her beauty.

Fournier gives the example of Blessed Mother Teresa, a woman who was not physically beautiful by any means but who radiated joy and love in such a way that she became known internationally for her spiritual beauty. Grace does not change our physical appearance as much as it changes us from the inside out.

Fournier then goes on to explain specific ways that Mary was beautiful:

If you see paintings and icons of Mary from different cultures, you will see that she is depicted in many races and many forms. Why is this? Because Mary’s beauty transcends every cultural definition - her beauty is reflecting God who transcends all.

How do you suppose Mary’s beauty played out in daily life? In my next post, I will consider portions of Genevieve Kineke’s book, The Authentic Catholic Woman, where she gives numerous examples. Here’s a tease - it involves leading a sacramental life . . .

You Are Beautiful, Radiant Inspirations!
Read
The Shame of Being Too Beautiful and Not Beautiful Enough
Read
Beautiful Me, Beautiful You: Chapter 2 {Momnipotent Book Club}
Read