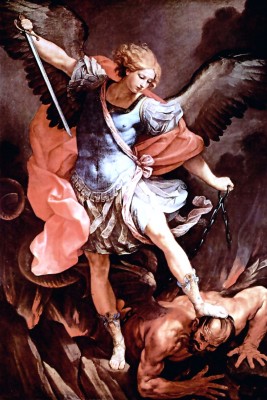 I like to think I am a pretty capable mother.  I tend to imagine that I have things under control, that in our household we churn in unison, a kind of familial clockwork that never fails.

And then, reality has a way of reminding us that we really don’t have it all figured out, that there are things at work that are unseen, good and evil, both of which most times, are utterly denied even existing.

I am a believer of the unseen.  I have experienced the most strange (good and bad) that I can not deny a kind of spiritual warfare is happening all the time, all around us.  It may sound old fashioned.  It might seem crazy.  I agree.  But I also can’t deny real life experiences that I have seen with my own eyes.  Just last week, my 9 year old son, my Knight started having nightmares.

The poor boy told me in detail of good versus evil forces battling it out in his dreams: the evil ones tempting him with Legos, and the good overpowering it all until the evil disappears from sight. It even included a vision of the devil, which scared my little boy more than he wanted to let on.

Nothing new brought these images to him.  He didn’t watch any scary movie or TV show.  I couldn’t point to anything specific that could have given him these images, and according to his description, it was graphic and violent.  I searched his eyes as he explained to me the details, and his face was scared, worried and panicked.  I told him I’d ask his Dad to bless the room for him, and in the meantime, pray to your guardian angel, and ask for better dreams.

That night, I casually mentioned to my husband, "Take a minute to bless the boy and his room with holy water will you?"

The next morning, my son was still in his room, still in his bed, when he began to tell me of yet another nightmare.  He was very descriptive in his narration, which he was being tortured and I was there, but instead of helping him, I simply watched it all happen. This one brought the boy to tears, and as we hugged, I reassured him, "Oh, Buddy, I'd save you, don't you know that...."

In his tears, he said he knew, but that it was a very bad dream and he didn't like it.  He shook as he cried, and I felt his fear.  My eyes too welled up, imagining this boy being harassed.

I had heard enough.

I, then, proceeded to find my husband getting ready for work. I asked him if he ever got the blessing done, and when he said "No", my request became more like a demand. "For heaven's sake, he's crying in there this morning, Get. It. Done."  I rarely make such forceful demands, and sensing my frustration, my husband quickly assured me he’d bless his bed and room as soon as possible.

Does that sound strange to you? Do you believe there is a spiritual warfare going on, unseen most times and usually laughed off by many?

I tell you, I can't even count how many times, we have blessed the house, our children or their bedrooms, when strange things are happening. Whether it is a nightmare, or kids telling me strange shadow shapes are on the ceiling at night, or they've even told me once, they heard dogs barking from their closet. (And we don't own any pets).

I couldn't even make this stuff up if I wanted to. I firmly believe in the authority that God gives the Head of the House. As wife and mother, I too, have taken holy water to different areas of the house, when my husband was absent. However, I will tell you, it doesn't quite work as effectively as when my husband, the Head of our House does the blessing with it. I can't explain why. Perhaps his faith is stronger than mine. Perhaps God works more effectively through the Head. I don't know.

But I will tell you this. For certain, every time he has used the holy water, the strange occurrences ceased, and peace was restored the very next day. Does this sound crazy? Perhaps it does. But I know what works, and I believe what I see working.

Last week, it proved true once again.  That day after my son’s second nightmare, my husband blessed his room before going off to work.   When night came for the third time, I kissed my Knight on his forehead, and told him to beg God for better dreams.  He then asked me if his Dad ever got around to blessing his room.

Knight sighed and went off to bed, as I mentally asked God for a better night’s dreams for him.

The next morning, as fate would have it, I didn’t have the chance to ask my husband if the blessing was done, as he left for work before I was up.  In the kitchen that morning, I was doing the dishes and casually asked my Knight about his dreams.  “How was it last night, Buddy?”

He answered, “I don’t know.  I didn’t have any dreams.  I just slept really well.”

Finally, upon asking my husband, I found out that he indeed blessed the room and just as quickly the nightmares ceased.  And they haven’t returned.

Coincidentally, if you believe in coincidences or that it was just apart of God's plan, I just finished reading the book, "The Rite" by Matt Baglio. And I highly recommend it. The recent movie with Anthony Hopkins called, "The Rite" is loosely based on this book by Baglio. And yes, I've seen the movie too.

The book, in my opinion is better than the movie. It goes into more explanation of the Church's teaching on exorcisms as well as follows a priest while learning how to be an exorcist. Hollywood as it is, often will take certain liberties in movie-making, and in this case, deviates from the book.

It's hard to say why, right now, all these seemingly isolated recent events have converged at the same time. I do think it's important to be aware, but not obsessed with it. It's a reality of living in this world. It's something to acknowledge and understand our part in it.

What keeps us safe?

Well, what keeps us safe, is what has always kept us safe: Living a life of morality, participation in prayer, the Mass, and the Sacraments and having a real relationship with God. It's called living your Faith. It's actively participating in living the elements of a holy life. Yes, we might fail from time to time, however Reconciliation is a very powerful Sacrament, (aren't they all?), but the ability to restore our relationship with God is building our defenses. Our trust and faith that God is merciful, is like that impenetrable force that can keep evil at bay.

For now, for us: we aren't afraid. God is stronger, always has been, always will be. I put my trust in Him, who has never failed us, never allowed for more than a few days harassment, who works through the many Priests called, and the many Heads of the House in order to keep fighting that good fight.

God bless them all!

Saint Michael the Archangel,
defend us in battle.
Be our protection against the wickedness and snares of the devil.
May God rebuke him, we humbly pray;
and do Thou, O Prince of the Heavenly Host -
by the Divine Power of God -
cast into hell, satan and all the evil spirits,
who roam throughout the world seeking the ruin of souls.
Amen.