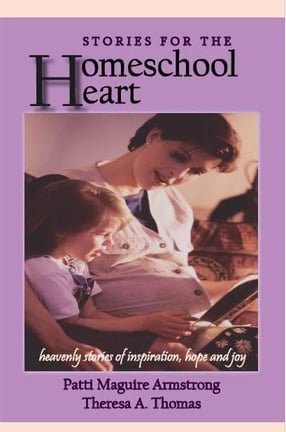 No one expected it. My co-author Theresa Thomas and I certainly did not. As contestants in the About.com Reader's Choice Awards, we had no reason to think that our Stories for the Homeschool Heart book would win. Rave reviews--some from very high places--had convinced us that our stories were just as uplifting and engaging as our nonobjective opinions had thought. Yet, we seemed out of the league of our competition--one of the Pope's books, a radio talk show host, a Jesuit priest and an author who had shared her story at a World Youth Day.  When our book was announced as a finalist, we expected nothing more than to have a good run at it; especially when ardent emails and radio appeals from our competitors reached our attention.

Yet, last month, with over 10,000 votes cast, Bezalel Books announced that Stories for the Homeschool Heart had been selected as the About.com 2011 Readers' Choice Award for best Catholic Book of  2010. Wow! That was uplifting news in between spelling, laundry and math.   How did we pull it off?  Why would a homeschool book win such an award?  For one, big families and strong networking are powerful allies in a voting contest. Perhaps the best part of winning this award is that it is one more brick in the wall of building up the public image of homeschooling.

Below is a recent article I wrote for non-homeschoolers to explain what is going on behind our doors, on dining room tables, on garage sale desks or any assortment of school rooms.

Homeschooled children are _______. Fill in the blank. Some would say: responsible, respectful, advanced or mature. Others prefer words like immature, un-socialized, nerdy or sheltered.

In spite of the movement graduating from fringe to almost mainstream, opinions about homeschooling run the gamut. Whatever you may think about it, homeschooling is growing at 8% a year with no signs of abating. Estimates range from 1.5 to 2 million children schooling at home in the United States. Surveys indicate that 10% are Catholic.

For the last 15 years, I have homeschooled eight of my 10 kids through junior high. I can offer some insights from personal experience as well as observation.

Homeschooling allows children to learn at their own pace at home without peer pressure. Parents choose curricula and pass down their values without contradiction or compromise. How this is accomplished varies family to family — from “un-schooling,” where a child’s interests drive much of the learning, to very structured learning.

There are pros and cons to homeschooling but, in the end, like everything in life, I believe a parent should only enter into the endeavor if she or he discerns God’s call to it. Homeschooling must begin and end with prayer. Many homeschoolers did not think it was something they would ever do, but through prayer, came to think otherwise.

Are Homeschoolers Weird or Anti-social?

I’ve done public, Catholic and homeschool. I have been invited to speak to 14 different non-homeschooling audiences. Two of these were in seemingly enemy territory: a professional teachers’ association (Phi Delta Kappa) and a senior class of education majors from the University of Mary in Bismarck, N.D. In both cases, I think my audience came away surprised that our different camps need not consider one another enemies.

For twelve years in a row, I have spoken during “Education Issues Day” to our Chamber of Commerce’s Leadership Committee. Committee members are selected annually from various businesses. It’s a prestigious honor for which they are excused from work. They spend several days throughout the year listening to presenters and learning more about our community on everything from business and education to leisure and the arts.

I’m invited each year by the chair, Marilyn Johnson, a retired sixth-grade teacher who, ironically, taught my oldest son the year before we began homeschooling. Marilyn and I always chuckle over that. She was a good teacher. One of the best. So we both understand that homeschooling is about far more than teachers.

“Who thinks homeschoolers are weird? Raise your hand,” I always begin. Inevitably, people look around. Some hands shoot up right away. “Raise your hands,” I repeat. “You aren’t going to hurt my feelings. I used to think homeschoolers were weird.” With that encouragement a few more hands cautiously go up.

“If you know people who homeschool, some may mix in so well that you can’t really tell where their kids go to school,” I continue. “But you may know some homeschooled kids who dress out of style or somehow look like they don’t fit in.” Usually, a few heads nod in agreement. “Well, you know what?” I ask and then pause for effect. “They probably don’t care. They don’t have to. But kids in regular school have to dress just like everyone else or they pay a price: They become shark bait. At home, kids can be who they are and not worry about being made fun of.”

From the expression on faces, I see this is a novel thought for some. Their own judgments are exposed for being just what they are in schools: social straightjackets of conformity.

My talk continues. “If a homeschooled kid is shy, people say: ‘Well, he homeschools.’ And yet, there are shy kids in schools but no one ever says they are shy because they are in school. My five siblings and I were shy until after high school.”

“After seven years of homeschooling my kids,” I add, “I listened to my siblings commiserate about their kids during adolescence — more self-conscious, worried about fitting in, not willing to step out alone. It hit me that my own children blossomed during adolescence, becoming very outgoing and confident. Could the difference be the lack of peer pressure in their learning environment?”

The first thing most want to know is: What about socialization? I point to a study conducted at the University of Florida by Larry Edward Shyers, Ph.D., who published his thesis, Comparison of Social Adjustment Between Home and Traditionally Schooled Students, in 1992. Observing through a one-way mirror, researchers rated children on various markers of positive and social behaviors. The researchers did not know which children were homeschooled. On maturity and socialization skills, the homeschooled children scored in the 84th percentile.  The demographically matched sample of public-school children only scored in the 27th percentile.

After analyzing the data, Smedley concluded: “In the public school system, children are socialized horizontally, and temporarily into conformity with their immediate peers. Home educators seek to socialize their children vertically, toward responsibility, service, and adulthood, with an eye on eternity.”

Other studies have shown similar results.

This information always impresses my audience. “Think about it,” I say. “In a classroom of 25 students and one adult, who are students modeling themselves after most? And which kids exhibit the greatest influence — the loud-mouthed bullies or the quiet, well behaved ‘A’ students? We all know it’s too often the loudmouths.”

When I spoke to the teachers’ group, my audience all nodded their heads in agreement.

It is at this point that I sympathize with teachers. They have a very challenging job and their role in society is very important. “I’m not homeschooling because I don’t like teachers,” I explain. “I do it because of the opportunity it presents —things that I do not expect of a public-school teacher. At home, I can hand down my religious faith, my kids learn in an atmosphere without peer pressure, we have the freedom to explore topics in depth and take field trips, and we don’t lose our kids to a world where friends are more important than family.”

From Incredulous to Intrigued

People want to know if kids really learn at home. I explain that, when I first read of kids thriving and doing better academically at home, I questioned whether I could duplicate such results. Once we began homeschooling, I understood why homeschoolers average 80% and above across standardized testing for math and reading. It’s largely a matter of a child getting individual attention and going at his own rate rather than getting held back or pushed ahead. For instance, if my child gets half the answers wrong on a page of English, we go back over it before continuing on. Likewise, when my child completes one lesson he can move right along to the next.

This past year on Education Issues Day, I followed a speaker representing a local community college. He explained that the online courses were being met with great enthusiasm. “The students tend to do better on these courses,” he stated, “because they can work independently and at their own pace.”

“Bingo!” I thought and later recalled this speaker’s point to my audience.

Towards the end of my talk, I start getting highly focused questions. Where do you get your curriculum? What are the requirements? How do you teach subjects you don’t know well yourself?

When it comes to choosing a curriculum, options abound. There are Catholic, secular and online courses, correspondence schools and even video courses. Parents can get the answer keys to textbooks and tests but it’s also an opportunity to learn along with the kids. Many communities have support groups — do an Internet search or ask around among homeschoolers — and there are annual conferences with speakers and curriculum fairs.

If you are interested in schooling at home, check with your state’s Department of Education to learn the specific requirements.

Homeschooling is not for everyone. And many homeschoolers eventually enroll in school or at least take a few classes in the higher grades. “We are not against the public schools,” I point out in my presentations. “We live in this community and we want our schools to be strong.”

I homeschool because my husband and I felt God directed us down this path. After eighth grade, our children attend a good Catholic high school. Thus far, all eight of the older ones have done very well in school both academically and socially. But I know kids who homeschooled all the way through high school and went on to excel at college.

Homeschooling is not a magic wand that automatically improves students or families. It requires hard work, dedication — and one other thing.

If you’re a Catholic parent discerning a possible call to homeschool your kids, remember: Homeschooling begins and ends with prayer.

Editor’s note: Stories for the Homeschool Heart by Patti Maguire Armstrong and Theresa A. Thomas has been voted Best Catholic Book of 2010-2011 [1] in the About.com Readers’ Choice Awards 2011. Click here [2] for the full list of winners.

Order online and support CatholicMom.com with your purchase: