Pebbles in My Pocket 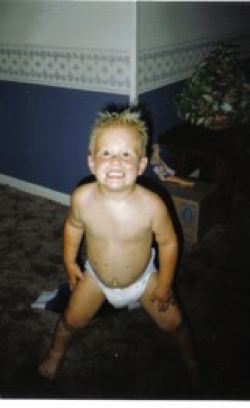 Seventeen years ago I delivered my second son; a bouncing baby boy. His older brother was thrilled! A baby brother had been the prayer order for many years and, as expected by Corey, God delivered.

On his first visit to the doctor his pediatrician looked at me instead of my baby and said, "So how are you feeling?"

I thought it strange he would ask that of me even as a nine pound, eleven ounce piece of me lay on the examination table kicking and screaming.

He clarified, "You're awful small to have had a baby this size."

I simply nodded. I didn’t reveal to him that my ob/gyn had predicted a 6 1/2 lb. baby. This bouncing baby boy was quite the surprise to all. 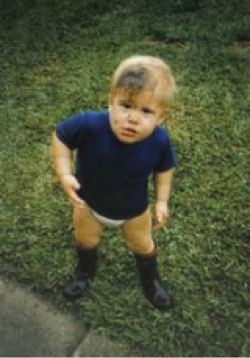 "Look," he bid me to my son's side, "you can see exactly how he was wedged inside of you."

And, like a puzzle, he took my son's hefty little legs and fit them into the contours of his plump belly. Everything fit perfectly.

Garrett did indeed look like a bull in a china closet. Everyone said so. He was all boy. White headed and demanding. Even when he cried, his cry was deep-throated and manly. He didn't sleep at night. 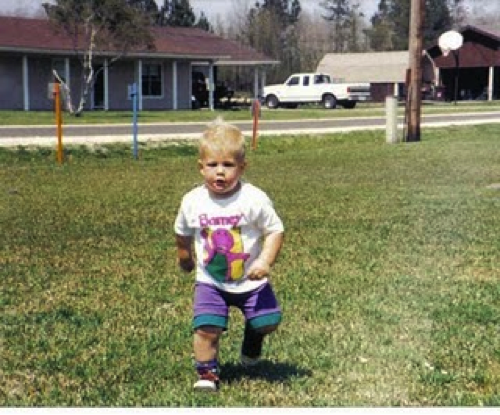 We embraced the family bed with this son. It was the only way the family slept.

I used him as the excuse for my tiredness, my moodiness, my frustration, my nervousness. It's true, I whined, the third child is the pinnacle. I looked down from the peak of motherhood and was afraid I would fall off the face of the earth. My very self had been demoted.

I admit I was tired. I was working part-time, had a soon-to-be six year old son and a three year old daughter. My son was starting kindergarten that fall.

I had had a miscarriage shortly before conceiving this son.

On top of housework and life in general, I wasn't stopping to simply enjoy being a mother.

I had allowed myself to get sucked into the vacuum known as motherhood in the 20th century...never realizing that I didn't belong there.

I wasn't listening to the whispers of my own body. How could I when there were moving pieces of me all over my house: demanding, crying, screaming even?

There were many times I understood too well why society trumpeted the Litany of Self:

Like Satan in the desert had tempted our Lord, 20th century America had built up this mountain of self and set me upon it and told me I could have it all.

"Again the devil took him up into a very high mountain, and shewed him all the kingdoms of the world, and the glory of them, And said to him: All these will I give thee, if falling down thou wilt adore me. Then Jesus saith to him: Begone, Satan: for it is written, The Lord thy God shalt thou adore, and him only shalt thou serve. Then the devil left him; and behold angels came and ministered to him."

There were many days I dreaded going home because I didn't want to face the music (ie: crying, poopy diapers, whining, messes, dirt), but beneath the earthly grime and human weakness I saw something more, something that elevated this life. In my children I saw the face of God. I realized the sanctity and blessings within and turned away from the desert. And found life...abundantly.

I didn't withdraw from my family and homelife as the world told me to do. Rather than try to escape into the 20th century mentality, I did what society tells us not to do.

I withdrew and I learned the art of blooming where God had planted me .

I decided to consume myself with it. I embraced this God-given role and embraced my home and family.

I couldn't help myself.

There was too much sweetness found in the pockets of daily life that saved me from the dizzying heights I had climbed in those first six years of motherhood.

Even more valuable was the knowledge that it wasn’t too late to change my mothering.

This picture represents one of those little pebbles I picked up along my way down that mountain. It's one of the many pebbles I put into my pocket. It's a picture of Garrett playing in our backyard with his first set of wheels. His sister's doll is beside him. We called it his "girlfriend." It's a picture of what life can be when you stop living in the outside world and live in and for the now.

Those pebbles in my pocket mean more to me than all the mountains in the world. They are the mustard seeds of my life's story. 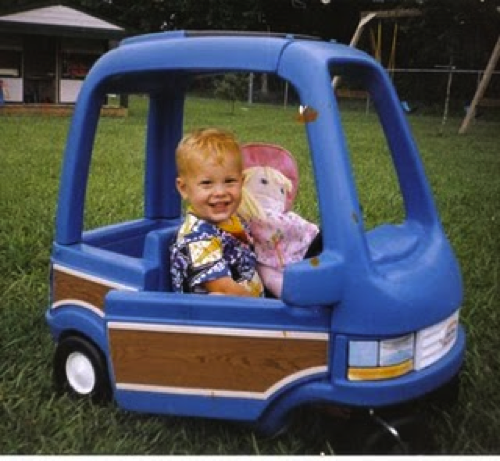 Today the baby who almost brought me to my melting point is seventeen years old. I find it a beautiful thing that he has a love for all things that wiggle, bounce, twitch and flail tiny.

I now see that his demanding cries were that mysterious voice in the desert which one doesn't understand and which many try to ignore. We are pulled away by the tempters in the desert: the outside voices which tell us to turn away from the other voice, the one that calls us, the one that demands that we grow, the one that begs us to come down from the mountain and become like children again, the voice that beckons us to turn back to what is a part of us and worthy of our time and self, the one that pleads even.

"A voice cries out: In the desert prepare the way of the LORD! Make straight in the wasteland a highway for our God!"  ~ New American Bible 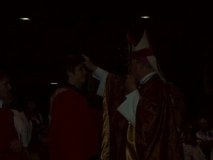 For seventeen years, the physical life of this child has been a spiritual journey for me.

Little does he realize that I am a much better parent because of him and his brother and sisters.

Saying he has been a gift from God sounds trite and redundant. He is so much more.

He is one of the pebbles I collect on the road that leads me to Heaven.

And while it might sound trite and redundant, please don't tell my mother's heart that. I stopped listening to outside voices a long time ago. I now listen with my heart. 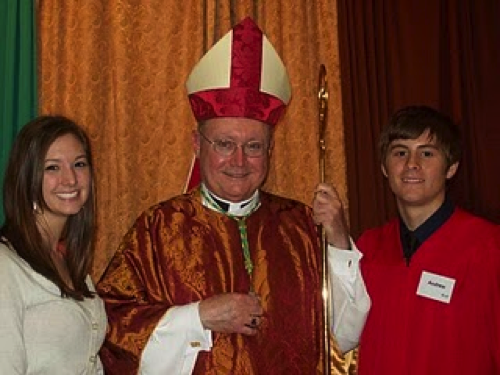 Garrett and his sister Kayleigh (his sponsor) on the occasion of his Confirmation on April 29, 2010 with Bishop Provost of Lake Charles Diocese.