Can You Help Catholics In the Military?

When we opened our store we heard from one of the local chaplains who was being deployed to an "undisclosed location" that it was almost impossible to get requisitions for Catholic devotionals for the troops he was serving.

Because of that, we decided to start Catholic Chaplain registries and to upgrade all orders to military addresses to Priority Mail at no extra charge. 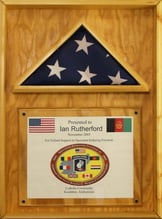 Since we launched our registry program, we have shipped over 6000 Bibles, medals and prayer books to chaplains serving in some of the most dangerous places on Earth including Baghdad and Afghanistan.

Unfortunately, the generosity that people had when the wars first started has waned along with support for the wars themselves. This means that our Catholic soldiers who are still fighting and dying, whatever you may think of the cause, are frequently short on things that can strengthen their Faith.

As an example of how difficult it is to get supplies through the military, we had a chaplain order sacramental wine from our store to be shipped overseas because he was worried that he would be reassigned before the wine arrived at his current station if he went through military requisitions!

Over the past two weeks I have received three requests for more items for our soldiers.

First, we heard from Chaplain Sheehan:

I am the only Catholic Navy Chaplain at Parris Island SC (US Marine Corps Boot Camp). I serve the recruits in a number of ways to include teaching Religious Education, preparing recruits to receive Sacraments of Initiation, and praying The Mass on Sundays.

I am a Battalion Chaplain and have daily encounters with the recruits in training, teaching, and counseling.

There is a consistent requests for Catholic Bibles and crosses (crucifix'). I get many request for protestant Bibles and Rosaries but have generous suppliers for these items.

Catholic Bibles, Crucifix's, and Crosses are harder to get donated.

Thank you for your generosity and possible assistance in securing these items for US Marine recruits. Thank you to your generous customers who support this ministry.

Second, we have Chaplain Victor. Chaplain Victor was one of the first chaplains we assisted and we have sent Catholic devotionals to his troops in Afghanistan and Japan:

I am Fr. Victor and while I was deployed in Afghanistan in January 2005 - January 2006, you have supported me with books, especially the Fulton Sheen's Wartime Prayerbook.  I want to know if you can donate more as there is a great demand for this book.

Third, we have Catholics in the Military. This organization just changed its name to Mission Capodanno. They promote vocations to the Chaplain Corp, send Catholic items to troops in need and provide spiritual assistance to military families. We have been supplying material to them for years and they are currently in short supply.

There are several other chaplains who have requested our assistance through the years and your generosity has made those requests bear fruit.

Can you still find it in your heart to give? These soldiers don't get paid much and are frequently in some of the worst places on Earth supported by an understaffed and undersupplied Chaplain Corp.

You can view all of the items that chaplains have requested at: http://www.aquinasandmore.com/militarychaplain