The Pope and the Disabled Meet in Madrid 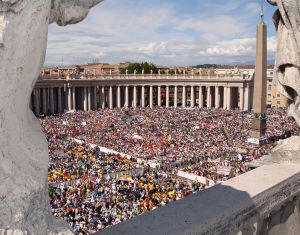 Among the groups honored by an audience with the Holy Father during World Youth Day, was a group of sick and disabled youth from St Joseph’s Hospital. Like the seminarians, university professors, and women religious, the Holy Father wanted to remind them of their vital importance in the life of the Church. This may surprise some, after all, the disabled youth who greeted the Holy Father needed escorts to help them walk up to greet him, and often they were unable to communicate with words when they did. This did not stop the face of the pontiff from radiating a quiet joy as he embraced each one in turn, expressing his love for them.

Watching this moving scene, I was reminded of a similar moment in the chapel of the Seminary in Dunwoodie, New York, where, in 2008, the Holy Father had come to greet disabled children. One young lady with Down syndrome brought a picture to the Holy Father with her friend. She reached up to hug him, and realized her friend was excluded, so she snatched her up in a three way bear hug, which brought many of us watching to tears.

The disabled have many things to teach society, as the Holy Father affirmed in his remarks in Madrid. First, the suffering serve as a means by which the humanity of society is measured;

“A society unable to accept its suffering members and incapable of helping to share their suffering and to bear it inwardly through 'com-passion' is a cruel and inhuman society" (Spe Salvi, 38).

Sadly society most often rejects those who suffer:  ninety two percent of babies diagnosed with Down syndrome are aborted, and increasingly the elderly are victims of euthanasia. We want to eliminate the imperfect, perhaps hoping to convince ourselves that our lives will never contain such suffering. This is a futile hope; suffering will visit us all some day.

There is reason for hope, however; the Church contains the antidote for this lack of compassion in today’s culture.

Jesus and, in his footsteps, his Sorrowful Mother and the saints, are witnesses who shows us how to experience the tragedy of suffering for our own good and for the salvation of the world. These witnesses speak to us, first and foremost, of the dignity of all human life, created in the image of God.

St Gianna Berretta Molla comes to mind; an Italian pediatrician who sacrificed her life for her unborn baby, refusing cancer treatments while expecting a daughter in 1961.

Where did she find the strength to give her life in that way? The Holy Father went on to say that God wanted to share with us his particular love for those who are suffering in His Passion.

because the Son of God wanted freely to embrace suffering and death, we are also capable of seeing God's image in the face of those who suffer. This preferential love of the Lord for the suffering helps us to see others more clearly and to give them, above and beyond their material demands, the look of love which they need.

Only by knowing Christ in a personal manner, the pontiff counseled, can we see beyond the ravages of disease on the body, and see the beauty of Christ in the soul of those who need our compassion. And, in helping them, we find our hearts healed and opened to God. In the end it is we who are indebted to them for what they have given to us.

In a mysterious yet real way, their presence awakens in our often hardened hearts a tenderness which opens us to salvation. The lives of these young people surely touch human hearts and for that reason we are grateful to the Lord for having known them.

So what do professionals and families of the disabled and sick give to society, according to the Pope? They build a “Civilization of Love” and become part of a “treasury of compassion” sorely needed by a society which too often “questions the inestimable value of life”. They become the healed rather than the healers. Their relationship with Christ and others is enriched, and, one person at a time, society becomes more compassionate.

I’ve seen this transformation occur in the lives of parents who were at first terrified by the news that their unborn child had Down syndrome. They recoiled at first, thinking only of the symptoms of the condition. However, if they knew Christ personally, and were given time to reflect, they began to see in the unseen child, a mere shadow on the sonogram, the divine image of Christ. Once the child was born, the bonds strengthen, and before long, those same parents who couldn’t imagine life with their special needs children, can’t imagine life without them

It’s been one of the greatest rewards of my life to be one of those parents. I have a nine year old daughter Christina with Down syndrome. She has brought about a radical transformation of the hearts of her family and the community. I share this story, along with 32 others, in my upcoming book, “A Special Mother is Born”.

Papal quotes are from this Zenit article: http://www.zenit.org/article-33244?l=english#.TlBYPfmD7Xc.twitter