How A Book about Angels Grew Cyber Wings 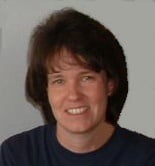 Editor's Note: Today we welcome a guest contribution from Melanie Ryther, author of  Partners in Holiness: Guardian Angels in the Lives of the Saints. I invite you to visit Melanie's blog and thank her for sharing her work with our readers. LMH

How A Book about Angels Grew Cyber Wings

I was five, and as five-year-olds are wont to do, I woke up in the middle of the night distressed and disoriented. My room wasn't completely dark, as my parents always left my door open a crack to filter in a soft glow from the kitchen nightlight. I shouted out for Mom and Dad. No one answered. I wanted to get up and look for them, but I was afraid to leave my bed. I started crying and that's when I saw it. The alligator's tail at the foot of my bed. Fear of the reptilian appendage trumped fear of the void beyond my covers. I bolted.

The apartment was eerily quiet, with no lights on save the kitchen nightlight, and no sign of my parents. (I later learned they had been down in the basement storage room putting away boxes.) On the verge of complete panic, I shouted once more, but this time I heard an answer–soft, gentle, and instantly comforting. 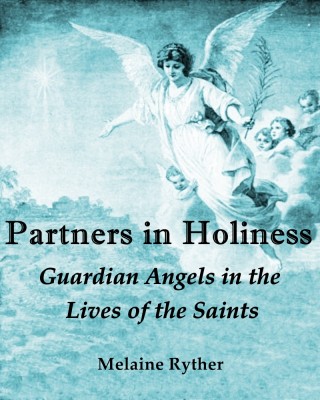 I turned to where I heard the voice, and beheld a sight that to this day is as vivid in my mind as it was that peculiar night. Standing in the doorway that separated our dining room from our kitchen were two radiant, white-robed figures. They filled the entire archway with their imposing size, yet I knew without a doubt that they were good. I ran to the taller one on the right. He picked me up and told me not to be afraid. Then the two of them took me back to my bedroom. The shorter angel (by this time I was certain as to what they were) reached down and made a sweeping motion with his arm at the foot of my bed. "There's nothing to be afraid of," he said smiling. The one holding me gently tucked me back in under the covers. I must have fallen asleep quickly because I don't remember them leaving or saying anything else.

When I woke the next morning, I immediately replayed the previous night's events to my mother. She had heard plenty of tall tales from me before, but there was something different about this story, she confided when I was older. It was too exact, too detailed. And I told it with more gusto and conviction than any other story or dream before. Eventually I stopped talking about the angels and the alligator's tail, the episode relegated to a filing cabinet in the back of my mind, replaced by newer and more relevant experiences.

Now there's an excellent chance, of course, that what I've just described is nothing more than a five-year-old's overactive imagination, fueled perhaps by seeing somewhere the famous Lindberg painting of the guardian angel helping two small children over a bridge. In retrospect, my angels did look very similar to that one, right down to the wings.

Whether it really happened or not is inconsequential. The memory has given me a priceless link to my childhood that I will always treasure. It also sparked something just as enduring and more important–a lifetime interest in the angels.

It was no surprise, then, that early in my writing career I wrote a piece entitled "Isidore's Angel," a retelling of a legend in the life of St. Isidore the Farmer, for My Friend Magazine. (No longer in circulation, My Friend was a children's magazine published by the Daughters of St. Paul.) The success of that piece, along with a few others written in a similar vein about saints, got me thinking about a book-length project. The only thing was, I needed a theme, something that would tie the stories together.

It was also about this time that I became increasingly agitated and annoyed at the preponderance of New Age "angel" books on the market versus the smattering of solid Catholic books about the angels. How were my kids–any Catholic kids–supposed to wade through all the hogwash to reach a truly Catholic perspective on the angels? Suddenly the lightbulb went on. I had my theme.

Using "Isidore's Angel" as a guide, I decided to tell the stories of saints who interacted in spectacular ways with their guardian angels. I spent countless hours pouring over classic and modern works on the saints and angels until I came up with the nine men and women who are at the center of Partners in Holiness: Guardian Angels in the Lives of the Saints. Like my earlier magazine pieces, I wrote the accounts in storytelling mode as opposed to straight narrative, taking certain liberties with dialogue and settings, but always staying true to recorded facts. At the end of each chapter I included nugget-sized bits of Church-approved information about the angels. This was a way I could take the "lesson" from the historical account and apply it to our modern lives.

Once I completed the book, I shopped it around to different Catholic publishers. As the rejections started piling up, I began thinking I was crazy to have invested so much time in something that only my own kids were going to read someday. But then Pauline Press and Media (the Daughters of St. Paul again) asked to take a longer look at the manuscript. I waited, hopes high, for almost a year to hear something. Every time I sent a status request, I was given a "still under consideration" answer. And then one day, sadly, I received the manuscript back in the mail with a polite note that basically said they couldn't use it at that time. Since I don't have the patience of an angel, I stuffed the manuscript in a cabinet drawer and moved on to other things.

Fast forward ten years later. As a follower of publishing news, I'd been hearing more and more about ebooks and digital publishing. The more I read about how authors were self-publishing not only new works but also their backlisted material, the more I got to thinking about those long untouched cabinet drawers that held a decade's worth of work, some previously published and some not. I pulled out Partners, blew off the dust, re-edited the stories, updated where necessary (Padre Pio had become a saint!), and uploaded it to Amazon and Barnes & Noble with a wish and a prayer. I figured that even if a few people read it and learned something, it was doing more good than sitting in a drawer.

I'm happy to say that more than a few people have downloaded the book since it went on sale earlier this year. And I'm also pleased to announce that this journey back to faith-related writing has inspired me to create a blog about angels and saints that is reaching people all over the world. (Who knew there were Catholic blog followers in Bahrain?)

My hope for readers of Partners in Holiness: Guardian Angels in the Lives of the Saints is that they will come away with a better appreciation and love of their own guardian angels, a deeper respect and understanding of the saints who lived before us, and a truer love for God, the Creator of us all.

Oh, and if can help allay fears of those dreaded alligator tails, my wish is for that as well.

Teaching Children about the Angels
Read
Children's Book Notes: On Angels' Wings They Greet the King
Read
New Books from Holy Heroes on the Rosary and Angels
Read