Sixty Percent of Single Catholics Own a Pet 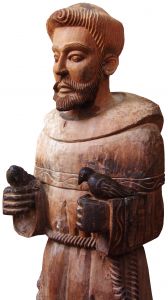 Editor's Note: Today, we welcome an interesting guest article from CatholicMatch.com. As we near the feast of St. Francis of Assisi, we found this perspective on pet ownership fascinating. LMH

PITTSBURGH, Aug. 25, 2011 -- As the feast of St. Francis of Assisi approaches, CatholicMatch.com, the nation's leading Catholic dating site, has new insights on pet ownership among the faithful.

A national survey reveals that the majority of single Catholics owns pets, a key source of companionship. Unmarried women are more likely to have pets than their male counterparts. The survey also reveals that twice as many singles own dogs as cats.

"Single life can be a lot less lonely when you can come home to a pet every day," says Christina Ries, CatholicMatch.com, editor. "Singles say their pets provide companionship and demonstrate a host of virtues, from loyalty to unconditional love."

This data was pulled from a national survey issued by CatholicMatch.com over its network and represents the attitudes and behaviors of the more than 1,000 single men and women that completed this poll between Aug. 1 to Aug. 24, 2011.

CatholicMatch.com is the largest online community for Catholic singles seeking marriage, friendship, and religious discernment. For more than 11 years, CatholicMatch has provided a uniquely Catholic experience for the community it serves.  CatholicMatch has distinguished itself by reaching a broad spectrum of Catholics in the pews, understanding that each person is at a different place in his or her faith journey. CatholicMatch now reaches 96 countries while having served more than 750,000 people.