Win "The Lion King Diamond Edition" for Your Family 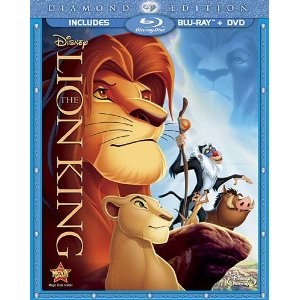 Today marks the re-launch of a classic on Blu-ray DVD: The Lion King, a family favorite, gets a re-release in a wonderful two disc format that includes some fantastic special features. When it was originally launched in 1994, the USCCB gave this G-rated an A1 for all audiences, saying of this now-classic:

Animated tale of an African lion cub (voice of Jonathan Taylor Thomas) who, led to believe he caused the death of his father the king (voice of James Earl Jones), runs away in shame, enabling his evil uncle (voice of Jeremy Irons) to assume the throne until he returns a full-grown lion (voice of Matthew Broderick) to discover the truth and reclaim the kingdom. Directors Roger Allers and Rob Minkoff combine stunning animation with deft comic touches and stirring musical numbers for an evocative allegorical story of a young lion coming of age and learning to assume responsibility as an adult leader. Some intense moments.

To celebrate a new, improved look for this treasured family favorite, we are offering our readers your chance to win one of five "Diamond Edition" copies of The Lion King. The Diamond Edition includes:

To enter to win your copy of The Lion King Diamond Edition, enter your name in the comments section below (not the Facebook comments please) by Friday, October 7 at midnight pacific time. Five winners will be randomly selected and notified by email.