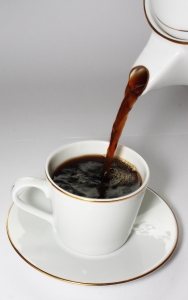 After my first book came out I did my first signing at a little Catholic book store nearby. My husband was so proud of me. He gallantly offered to take me out to lunch at a diner.

"Oh!" said one of the bookstore ladies, out of the blue. "Don't let him take you to some dive."

How ever did she know?

"Dear Lady," I said reassuringly patting her hand, "You don't understand. I WANT go to some dive."

Many a time Greg has offered to take me somewhere nice and I've asked if he'd mind if we took it down a notch.

I freely admit it. I'm a cheap date.

Earlier in our marriage I wasn't. I wanted to go to nice places. I wanted to put on the vintage little black dress. But I discovered as the years went on and the family grew (and I grew) and the money got stretched tighter and tighter (and so did the dress) that I was enjoying it less and less. It didn't matter how good the food was, how quaint the atmosphere, good old Bill marched in at the end and dumped a bucket of cold water all over it. "Imagine all the food," said Bill, "that you could put on the table for the whole family."

One solution was to stop going out as often so that the few times we did go would feel legitimate.

Not much - lemme tell you.

A couple of years ago we hit it - not the Lotto - a PLAN! We would go out once a week and get coffee at a bookstore. We both love books, just being surrounded by them makes us feel warm and fuzzy. A coffee shop in a bookstore - double bliss - which you agree would be a good name for a specialty coffee. "We'll take two Double Bliss's please. Make mine a decaf."

Then my husband got laid off. For awhile we had been ordering the specialty coffees. Suddenly that was extravagant. Fine. It's the date that counts. Plain coffee for me. There were times when Greg said he didn't feel like a coffee - but that I should go ahead. Once, we drove out, combed the car for change, decided to hang out and talk in the car and then went home and brewed our own coffee.

But you know what? Being broke didn't ruin our date. We needed those weekly nights out.

I've gotten so attached to those uninterrupted coffee dates that now when we do go out to dinner, I prefer to go somewhere with no waitstaff - like Wegman's.

Just us on our much needed break from all worldly cares.

Best of all, IT'S CHEAP!