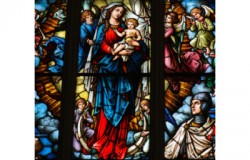 Last week was a bad-parenting week.  I yelled at the kids.

It seems like everywhere I turned, someone was touching something they shouldn't or digging in a newly organized closet, or breaking something I need.

So I lost my patience and yelled.

I've been thinking a lot about Mother Mary lately and how she parented Jesus.  I'm always sidetracked by Jesus' perfection, which makes me quick to throw Mary out as a resource when it comes to my daily parenting struggles.  I mean, how hard did Mary really have to work?

Still, at some point, Jesus was a toddler.  He probably dug in closets, colored on walls, and explored the world via his mouth.  Mother Mary dealt with the trials and tribulations of all the developmental stages; she didn't get a pass on them.

How did she respond?

How did she react?

We don't know these things because the Scriptures don't really say.  The Bible doesn't outline an exact moment when Mary and Joseph were, figuratively speaking, forced to deal with a plumber because Jesus shoved rocks down the pipes.

We don't know how she talked to Jesus, how she set up their daily life, or what she did for consequences for inappropriate behavior or broken rules.

But it dawned on me recently that perhaps it's not the mechanics of Mary's motherhood I need to seek to imitate.  Perhaps what I most need to contemplate and model is her disposition, her inherent qualities of mind and character.  When the Angel Gabriel announced to Mary she would give birth to a Savior, she responded, "Behold I am the handmaid of the Lord, let it be done to me according to thy Word."

I googled the definition of handmaid and according to Merriam-Webster, it means a female servant, a person whose function is solely to serve or assist.  The word implies a dependence upon the one being served.  Mary embraced her role as servant, not CEO.  She wasn't constantly trying to usurp power and tell God how things should go.  She obediently went about performing her duties with the heart and attitude of a good steward.  Because that's what she was and she knew it and she accepted it

I too need to be a handmaid of the Lord.

A humble, broken, imperfect servant who totally depends on her Master for all things.

And right now, my Master has clearly outlined His will for me.  He tells me over and over again on a daily basis that it includes:

• giving drink to the thirsty;

• and comforting the afflicted.

My parenting problems start when I rebel from these duties, when my human nature wants to shirk the responsibility.  I fail in my role as a mother when I forget to act as a handmaid--to serve when I don't feel like serving, to love when my children behave in unlovable ways, to be kind when I'm met with obstinate, rude behavior.  This is the answer to my parenting woes:  the daily living out of Mary's fiat, a personal and repeated effort to echo Mary's proclamation,

"I am the handmaid of the Lord, be it done to me according to thy Word."

This column originally appeared at Catholic Digest and we thank them for giving permission to reprint Colleen's work here.

Colleen Duggan is the author of Good Enough Is Good Enough: Confessions Of An Imperfect Catholic Mom, published by Ave Maria Press. She is a Catholic writer, teacher and speaker whose work has appeared in Catholic Digest, Creative Catechist, CatholicMom.com, Aleteia, and Integrated Catholic Life.

Martha or Mary? On Choosing the Better Part
Read
Advent with Mary: Mary's Selflessness
Read
Stand with Mary at the Foot of the Cross
Read