Little Angels are a DVD series in which preschoolers learn the basics like the ABC’s in the context of Bible stories told to preschool twins in their bedrooms by little angels who come down from a painting of Heaven on their ceiling. At the end of each lesson, Roma Downey has an informational chat with the parents about how to complete the character lesson, for example to encourage children to complete their chores or help them overcome irrational fears.

The graphics are a bit lower quality than typical children’s programs on TV, and the angels in sneakers were jarring at first to this Italian art fan, however, my daughter didn’t mind the modern angel costumes, or the graphics and she loved the music, she got up and danced! I thought that the Bible stories are well told, and the character lessons creatively incorporated into the story. Roma’s segment was a wonderfully reminiscent of her role as Monica on her runaway hit series “Touched by an Angel”. She is just as lovely and sweet as ever, with her lyrical Irish brogue.

This would be a great Christmas gift for the preschoolers in your family. Two DVDs will be released on Nov 1st.

Velasquez: I loved the series “Touched by an Angel” where you played Monica. Of the nine years you acted in the series, share with us a memorable moment.

Downey: We did a show in Salt Lake City. We had the community show up as extras pretending to play the community. It was just one of those moments of profound connection, each to the other, where grace is present, it never ceases to move me. It was fantastic.

Velasquez: Do you have any stories of people who were touched particularly by the show?

Downey: I think that many times we had actors come in to us whose lives in some ways echoed the journey that the character they were playing were on and there was always a sweetness to the coincidence of that. We had a line that was in one of the early shows, which said, “Coincidence is God’s way of remaining anonymous.”

Being on the show was just a fantastic experience for all of is, and for myself in particular, was my relationship with Della Reese. The relationship was what you saw between the character of Monica was really echoed by our off screen relationship and we remain close and loving, to this day, she’s been such a wise, loving mentor in my life, she’s been like a mother to me all these years. I’m particularly grateful for her and for her love.

When I was a little girl, my mother died when I was ten. Tragically, while we were working together, Della’s only daughter died. I remember, not long after, she took me in her arms. And she said, “You know, God is so amazing, Roma, I always knew he brought me into your life because you needed a mother, I just hadn’t realized He was bringing you into my life because I was going to need a daughter. Will you be my girl?” and I said, “yes!” and then she answered, “Then I am your Momma!”

Velasquez: Its such a gift to give someone; to be needed, its wonderful you did that for one another. I was wondering what have been your favorite projects since “Touched by an Angel?”

Downey: Well, one of most favorite projects had been raising my family and they have been such a true joy for me. And I think that there might have been a moment when I might have just kicked my feet back, and thought, “I’m loving this”; but you know, I love God, I love angels and I love children. And so I had this opportunity to produce, nurture, help to shepherd the script, the animation, and we’re bringing “Little Angels” to market next week. The animated DVD series was developed for preschool children. It’s like all roads have led me to this place, this project. It was such a privilege to be the messenger for all those years, and to deliver a message of God’s love for millions of people, and here we are, we get the opportunity to do that again, it’s the same message but this time we’re bringing it out for the little children, for the wee ones. So it’s a beautiful, heartfelt project.

Velasquez: I watched it with my daughter and she got up and danced to the music its lovely. There’s a positive critic! Are Alex and Zoey based on real children? 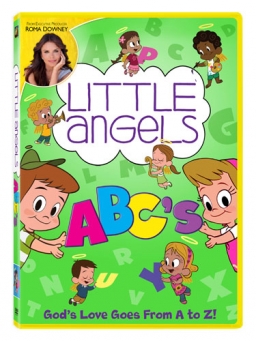 Downey: They’re not, but they cover the gamut of experience and they face all the challenges that any four year old kid is bound to deal with. They’re siblings, so there’s a little bit of rivalry and jealousy, a little bit of lack of cooperation. We tried to deal with many of those themes throughout the episode, we’re releasing on November 1st “Little Angels ABC”, and “Little Angels Animals” and we’ll be following in the spring with “Little Angels 123” and then we’re hoping, down the pipeline to bring colors, shapes and so on. They also have a couple of books coming out in the spring and a couple of toys in production.

Its just very exciting, anybody that’s seen it, anybody that’s experienced it, see the potential for it as a brand, there’s nothing quite like this, and the marketplace that combines the desire to educate our children with practical life, practical learning skills. But it also introduces them to timeless Bible stories, and engages parents to discover fun ways to encourage their children to live by timeless Christian values.

I’ve been a working mom, most of my life, Leticia. It’s hard as a mom sometimes, you know, we all need to buy ten minutes; twenty minutes to get on the phone to deal with the plumber; to deal with a business call or whatever. I used to try and find a little space to deal with something. And it seems to me if you’re going to put them (your children) down in front of something, wouldn’t you rather they be put down in front of something which you knew you could trust for content? And that you knew was going to fill your child’s mind and their heart? Fill their mind with learning and their heart with how to be in the world: how to be kind, how to share, how to overcome your fears; the power of prayer?

And also it’s so fun; we have eight little angels characters as you know and they come down (from the nursery ceiling) when the mom and dad aren’t around. They each have very unique personalities, and one of those personalities is Uriel, he’s the angel of creativity. And he’s a painter, and he speaks in Dr Seuss-like rhymes, he paints pictures for us in the nursery, and then, it’s almost in a dream the angels take the children into the picture, transport them back in time to the Bible. Suddenly our kids are able to observe Noah building his ark, or being in the belly of the whale with Jonah, or see how Joseph’s brothers treat him badly because they were jealous of him. And they were able to use age-appropriate telling of these Bible stories, to reinforce these little life lessons that we’re teaching the kids. And when the kids come back into the nursery, the angels sort of reinforce that lesson for them. And then there’s a moment at he end of each DVD where it’s called “Little Life Lessons with Roma” where I speak directly to the parents and I continue to deepen the life lessons we’ve just explored in the DVD. I describe ways to further these with learning opportunities, engage in conversations with your preschoolers fun ways to engage your preschoolers’ imaginations and so on. That was great fun for me to do.

Velasquez: Parents are getting advice from so many different areas, its good to know its coming from a Christian perspective.

Downey: Absolutely. I don’t know if you know the MOPS (Mothers of Pre Schoolers) group at all, but this has received endorsements from MOPS. We know how busy moms are when they’re shopping, too and how great to be able to pick up our DVD or CD and see that golden seal of approval right there on the cover. If they had any doubt at all that this is something they should be getting for their kids, you know there’s so much junk out there, our kids really learn through visual means these days. We parents have to control what comes into them, that content. And so I’m very proud, this is something I have been working on for 18 months and I’m a person of faith myself, so I’m very proud to bring this out. I really believe in it and think its going to be a very valuable teaching tool for Christian families. And I also think its funny, its great. Let’s face it, if it isn’t funny if the kids don’t feel compelled to watch it, it doesn’t matter how good the message is. We’re not going to keep their attention. It’s got the best writer, we have Phil Lawler, it’s got the best animation. It’s been great for me to shepherd the animation process, to see the designs grow and emerge. We tried to keep the angels contemporary, we have them in sneakers, and jeans, we wanted them to be relatable to our children. And sure you’ve noted Dina, the angel of learning she has a little Ipad. That made her very “of the moment”. There hasn’t been a screening group that we’ve shown it to that they haven’t gasped in delight when they see Dina’s Ipad. And you know we’re coming out with some apps on Itunes, and some really great games, they’ll be a daily prayer you can get for your child, we thought that was also a very great way to introduce prayer to your child’s life that you can go and say that prayer together. We’ll be following up with recipes, where the final ingredient will always be a “little sprinkle of love”. I just think it’s going to be fantastic, I’m heading on the road to do a tour between now and the end of Christmas, so now going out to try and spread the word.  (Check the Little Angels website for where Roma’s going to be promoting the DVDs) http://www.littleangels.com/press

Velasquez:  I’ll be giving you the Catholic Media Review sign of approval for these DVDs as Christmas gifts. Thank you for what you do with Operation Smile.

Downey: It’s an opportunity to plug their work, and my experience asking people to help is that sometimes everybody gets paralyzed at the enormity of need in the world. And Operation Smile really does offer the possibility that we just change it one smile at a time. I really feel that somehow that becomes more manageable that if we all did something that way we could change the world.