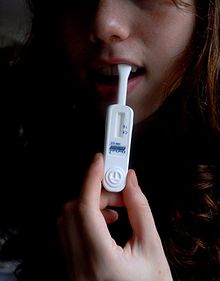 It’s always an awkward moment when, in the ER, I ask teens about sexuality or risk of pregnancy. I can get a feel by the awkward silence that follows whether I’m talking to a family that has open conversations about sexuality. I will be having many more of these conversations now that the American Academy of Pediatrics is recommending universal screening of all 16-year-olds in my area for HIV. Specifically, the new recommendations state that all teens age 16 and up that live in regions known to have a high HIV infection rate should be tested. This includes most urban areas and my home of St. Louis, Missouri. Previously, only teens that self-identified as sexually active were offered HIV testing.

So, realistically, this means that your sixteen-year-old, no matter how innocent, is supposed to have an HIV test at age 16 and will be offered this testing by her pediatrician. Many emergency rooms will also start offering an HIV test to all teens 16 and older that come to the ER for any reason.  My own hospital, St. Louis Children’s Hospital, is already offering universal teen HIV testing.  You do have the right to decline testing.  As Catholic parents, what do we say to our sixteen-year-olds that swear virginity? What do you say when you take your son to the ER with a broken ankle and he’s offered and HIV test? Who’s going to pay for this test?

These new recommendations for universal screening at age 16 stem from the unfortunate reality that the rate of new HIV infections among teens continues to be high. Young adults and teens between 13 and 29 represent 34% of new HIV infections, the largest share of any age group.1  And, 48% of youths who are infected don’t know they have HIV. Teens who don’t know they are positive for HIV are more likely to spread the virus than those who are aware of their infection. Under the old recommendations, the rate of new infections in teens was not declining.

The new test is a cheek swab, not a blood draw, and is essentially painless. It takes only seconds, and costs $14.

But really, would you spend $14 of your own money, your insurance company’s money, or even the government’s money for a test that your teen swears is not necessary? At first thought, I’m not sure I would. But, as a pediatrician and a mother, I still support the recommendation for universal testing at age 16. Here’s why—just the offer of testing promotes those essential and uncomfortable conversations about adult relationships that we need to have with our teens.

I ask those embarrassing questions all the time—“When was your last menstrual period? Any chance you might be pregnant? Have you ever used any recreational drugs? Do you smoke?” Depending on the situation, I often ask the parents for privacy. Most parents are anxious to give their child the opportunity to have a private conversation with their physician and readily hop up and leave the exam room. The parents always seem anxious when I invite them back into the room. They want to know what their teen told me, but they are afraid to ask. Occasionally, teens request that their parents stay with them, and these kids warm my heart. I’ve never had a parent decline to leave the room, but if they did, that would be fine. When a teen reveals risky behavior to me, I try to facilitate a conversation between them and their parents. Legally, however, I cannot discuss anything with their parents unless they give me permission or they have a potentially life-threatening condition.

My heart always sinks when a teen feels they cannot talk to their parents about their risky behaviors. We all know they are only seeking love, intimacy, joy and acceptance.  Even well-meaning health care professionals will offer our teens medical advice that is inconsistent with our Catholic values.  And they will do it behind closed doors.  Now, with universal HIV testing, teens are offered an HIV test during the initial part of the ER visit and then put in a room to wait.  That long ER wait after an HIV test is a prime opportunity for parents to talk to teens about healthy adult relationships.  As parents, we love our children in a way that no one else can. We need to talk to our children about sexuality and healthy adult relationships before someone else does.