The Family Dinner, It's Not Just for Thanksgiving Day 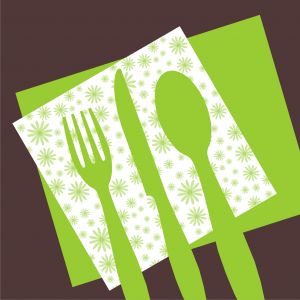 This past Sunday out priest asked a question during his children's homily that brought a sad, sinking feeling in the pit of my stomach when the answer was given.  He asked a group of twenty-five to thirty children how many of them ate dinner together with their family.  Startlingly, only three or four raised their hands, some of whom were brother and sister.  What's up with that?  What does this say about the families in our country when  in a small parish of about 200 active families there are so few taking the time to sit down and eat dinner together?

Father Leo Pantalinghug has a website called Grace Before Meals.  He speaks (and cooks) all across the country sharing the importance of family meals. There is a study linked on his site that reveals some interesting, and scary statistics.

There are a few of the categories in the study we should look at. The Importance of Family Dinners IV, was done by The National Center on Addiction and Substance Abuse at Columbia Universityand released September 20, 2007.  It shows that 59% of teens report having dinner with their families at least five times a week.  Based on the numbers in our small parish, I was actually surprised the number was this high. Also surprising was the resulting percentage is actually up from 1998 when the number of teens having dinner with their families was 47%.  For those who have dinner as a family seven nights a week, the number dropped to only 39%.  What really made my heart jump with joy, but sink in the sadness of this reality, is that 84% of the teens surveyed said they prefer having dinner with their families.  Even teens 16-17 years old said they prefer family meals.

This study also looked at the correlation between family dinners and teen substance abuse.  These numbers are rather disturbing. "Frequent family dining is associated with lower rates of teen smoking, drinking, illegal drug use and prescription drug abuse" (The Importance of Family Dinners IV, p. 5). The study shows that compared to those teens who eat dinner with the family five or more times a week, those teens who eat dinner with their families less than three times per week are:

Why these results? What could the family dinner have to do with substance abuse? It is pretty obvious.  At what other time of the day does a family have the opportunity to come together and discuss the events of the day?  Another catagory I want to share from this study was on the family dinner and communication.  When the teens were asked at what time of the day is the best time to talk to their parents about something important, 47% said it is during or after dinner.  Of those teens that have dinner with the family five to seven times a week 54% said during or after dinner was the best time to talk to their parents.

This study gives us the scientific research reporting what we alreay know but might not want to face.  It is very important to come together for a family meal as often as possible, daily preferably. "And though it cannot be the solution for every problem, ... the simple act of eating together as a family has an effect on the development of children" (www.gracebeforemeals.com).

Thanksgiving is coming up at the end of the month.  Reports tell us this holiday is the most heavily travelled holiday of the year.  It's the holiday in which families drive or fly "over the river and through the woods" to be with family and give thanks for our many blessings.  It's the day in which we catch up on eveyone's life. Little Johnnie is how old now? Suzy Q is getting married when?  It's the day when we remember with good stories those who have left this life and gone on before us to welcome us to Heaven one day, God willing. At the end of the day we are full of both good food and good feelings, the kind of feelings of love that can come only from family. It might require a heated discussion to arrive at these familial bonds, but at the end of the day hopefully we're all glad to be family.

The large scope of this wonderful dinner can usually only happen once a year due to busy schedules and geographical distance between families, but why is the fellowship of family limited to once a year? It's not! We can have these same great discussions catching up with one another at the end of the day in our immediate families.  It's a time to decompress from the hustle and bustle of the day.  It doesn't have to be over a large spread of food, just a simple meal still offers the opportunity to grow as a family and strengthen the bond of family. Here are some tips for strengthening that bond straight from Fr. Leo's Grace Before Meals website.

"Feeling overworked, over scheduled or overly tired? Take some time out and enjoy a meal with friends or family members. This simple act can help you recharge and reconnect with the people who matter the most to you. Here are a few ways you can incorporate the GBM philosophy into your daily life:

So, have a very Happy Thanksgiving and enjoy the day and your family as together you give thanks to God for all your many blessings. Then, consider a challenge.  Talk with your children about how nice it was to come together with your family for Thanksgiving dinner.  Let them tell you what they liked about it, other than the pumpkin pie of course.  Then ask them to join you as mom and dad for dinner at least fives times a week until the end of the year.  It may be a struggle to make that happen, but again it doesn't have to be over a feast. A bowl of soup or a sandwich together as a family is better than not at all. On New Year's Day, look back over the last few weeks and see if it hasn't enriched your family in some way.  Ask your children if they want to keep up the new habit.  I will be truly shocked if you don't see a difference in your children and your family.

Check out www.gracebeforemeals.com for lots of good advice on dinner topics as well as fun recipes to prepare together as a family.  Happy eating together!

Order Grace Before Meals by Fr. Leo Patalinghug and support CatholicMom.com with your purchase