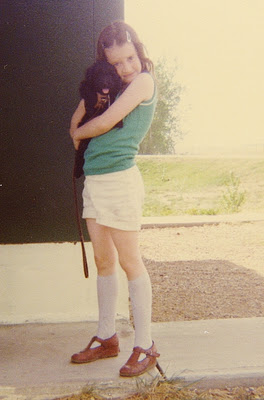 This is me around age 7, cuddling up with my first puppy after a week at camp away from him. He wasn’t the first puppy I’d loved, but the first I’d actually picked out and claimed as my own rather than picked up as a stray from our town filled with vagabond pups.

This photo depicts best how I’m feeling right now. Maybe it’s knowing the holidays and colder weather are coming; that shift from exterior to interior. I suspect there’s more to it, though, and not all of it is nameable.

What I do know is that I’m yearning for Abba Father. I’m needing a bit of a resting place, some soft spot to go to curl up and let go for a while.

I’m thinking of a time I fell asleep in my father’s arms. He was wearing a Pendelton shirt, a little on the scratchy side but simultaneously comforting. I was curled up in his arms near the fireplace in the living room of my grandparents’ home. I recall the padding of his heartbeat against my ear, his rhythmic breathing, and the gentle resonance of people talking quietly all around. It was the epitome of safe. Even after I awoke, I just stayed there for a long while, allowing myself to feel the warmth of the fire and his sure, safe arms before re-entering the colder world beyond his lap.

That’s what I’m wanting right now. And I know that this need isn’t something any human being can fulfill. So I won’t go expecting it of anyone in my life. There’s only one place to go for it.

I tried twice yesterday to go to Adoration, but each attempt was unsuccessful. So I will keep trying. Eventually I’ll get there, and it will be worth it.

The world can be cold. I just found out last night that my little boys were exposed to a sexually explicit R-rated movie in my and my husband’s absence. My heart breaks contemplating their punctured innocence, and the fact that we weren’t there to stop it, to guard their precious souls. I know they are wounded, as I am as their mother. I’m still processing how to deal with this.

Just before that revelation, I attended a session at our Catholic high school about drug use in our area. I learned that heroin use is big right now in our city, and that marijuana is 30 percent stronger now than during the days of Woodstock. There are more emergency room visits related to it than ever before due in part to the dangerous rise of the heart rate associated with its use. The drug ecstasy is also showing up in our school in slightly higher amounts than neighboring schools, according to a poll.

I can do what I can do, but I can’t stop this altogether, I can’t shield my children from the world that awaits. I’m going to need all the injections of grace I can take in to move through this darker part of the parenting journey, knowing that each passing year my little ones are going to be more and more vulnerable to the forces of evil. And that I’m helpless in the face of some of it.

I need to be fueled anew by that greater force that rises above it all, to store up grace that will be necessary for what’s next. I need to cozy up to the Creator again, to go to where He is sitting and waiting, and climb up into His lap. Only there will I find the warmth and hope I’m lacking at present. Once found, I can bring it to my kids, and trust that through it, they will find the love I have for them — that the Creator has for them — more attractive than anything else they might be offered as enticement.

In Scripture this morning, I read from 1 Tim: 1:5: “Whereas the aim of our charge is love that issues from a pure heart and a good conscience and sincere faith.” That’s what I’m seeking in the Creator’s embrace. And I know that without going straight to the Source himself, I’ll get only cheap substitutions.

I’m heading there. I’m on my way. I’m going for the sustenance I’ll need. When I’ve sat there long enough, when I’ve gathered up all my strength again and can see the clear path ahead, then I’ll be able to do the work I’ve been sent to do.

Q4U: Where do you go for a re-fueling of the spiritual kind? How do you deal with the darkness?