When Holidays are Holy Days 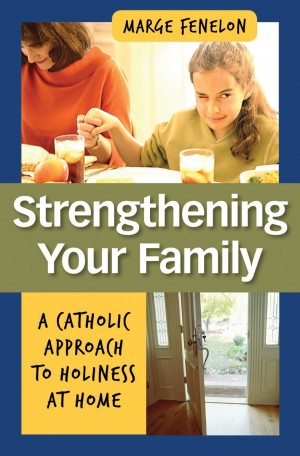 Editor's Note: We congratulate Marge Fenelon on the release of her wonderful new book Strengthening Your Family: A Catholic Approach to Holiness at Home. With the approach of the upcoming holiday season, this is the perfect time to treat yourself to Marge's book. Watch for her guest appearance soon on the Catholic Moments podcast. LMH

In an effort to grab a bigger piece of Holiday Shopper Pie, major retailers have altered their “after Thanksgiving” hours such that they’ve begun to cut deeper into the Thanksgiving Holiday itself. In recent years, chains such as Target, Kohls, Macy’s, Wal-Mart, and Best Buy had opened their doors to customers in the wee hours – anywhere from 3 a.m. to 5 a.m. – starting a trend that has continued. Last year, the sales began at midnight.  This year, Wal-Mart will open at 10 p.m. on Thanksgiving Night and Toys R Us will open at 9 p.m. The movement to roll Black Friday into Black Thursday has met with mixed reviews from employees and shoppers. Some wonder whether the same trend will begin with the “after Christmas” hours, by cutting into Christmas Day. What about Easter and other religious holidays?

I’m actually delighted to see retailers dropping prices and promoting sales. In this economy, we all can use a price break. Additionally, it shows that retailers can sell items for far less and still turn a profit! Sales (even holiday sales) are fine in and of themselves, but they become a danger to society when they encourage consumerism above family tradition.

One would argue that no one is forced to shop on those days, and I agree. However, when retailers offer outrageous deals on limited quantities for a specified amount of time, they put the panic on consumers who are trying to stretch their dollars as far as possible. What’s more, doing this on holidays (as opposed to other times of the year), manipulates consumers – especially parents convinced that Susie and Johnny will be happy on Christmas morning only if they get THE toy all their friends are talking about – and plants false notions into their hearts. Consumers who fall for this propaganda come to believe that they ARE doing good things for their families by buying them the “perfect gift,” which they now think they can afford because of the sale. Sadly, most of it is purchased on credit, which only increases their financial difficulties, but that’s fodder for another column…

With this mindset, families are being pulled away from the family table on holidays and toward the outlandish world of competition and merchandising. Instead of spending focused time together during which they can foster unity and tradition, relish a relaxed meal, and share real affection, concern, and interest in one another, they’re riffling through sales flyers, plotting merchant routes, piling into the car and heading out to get in on the best deals in town. Worse is when the family is divided, with Mom heading for the department store, Dad heading for the hardware store, and the kids either off to the mall or left behind at home.  Even if the sale begins after the usual celebration time for most families, they’re anticipating the big holiday sale and adjusting schedules and activities in order to participate.

By digging deeper into the holidays with their holiday sales, retailers are digging deeper into what should be sacred time for families, and we’re letting them. If we didn’t attend the holiday sales, retailers wouldn’t hold them. If we weren’t willing to cut Thanksgiving or Christmas dinner short for them, retailers wouldn’t open their doors for us at those hours. They’re only giving us what we seem to want.

Do we? The key is to form ourselves and our children into not wanting it, and that starts by forming strong families in an atmosphere that stands firm against the current. When it’s our time together, it’s our time together. Period. That takes guts and self-discipline, but it can be done. This is something I talk a lot about in my latest book, Strengthening Your Family: A Catholic Approach to Holiness at Home, just released by Our Sunday Visitor. When our homes are places of joy and belonging, when we obviously value our times and traditions together, and demonstrate true commitment to one another, the current outside rushes past without dragging us along with it.

Oh, sure. We might save $100 on that new gizmo the kids want for Christmas if we rush out the door in the middle of the night…or right after the pumpkin pie’s been wolfed down. But is that really worth missing the laughs and stupid (sometimes very stupid) family jokes? How about the knowing glances between siblings over the memory of a childhood prank?  Is it really worth diminishing the satisfaction of lolling around together after having enjoyed a great meal? Or the chance to savor all the beautiful holiday experiences and impressions? Is it worth deterring the asides and inflections that spontaneously surface when we’re all together and no one’s in a hurry to get anywhere?

The word “holiday” is derived from the word “holy day,” a term coined in the early Church to represent sacred festivals, days of special significance during which people rested from usual activities. Holidays were meant to be times to commemorate and celebrate the themes and symbols that mean something to us, and that help make us who we are. Let’s show the retailers that our families are more important to us that their holiday sales. Who knows? Perhaps it will help them to realize that the families of their employees and their own families are more important, too. The family table simply cannot be replaced by a shopping cart, no matter how good the deal. When we turn holidays back into holy days, not only will our individual families benefit, but all of society will benefit as well.