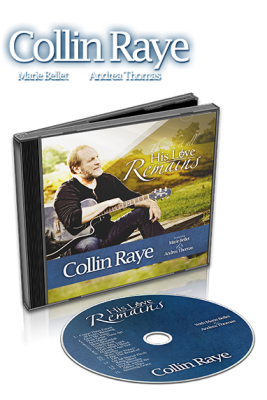 When I look back and remember the Advent and Christmas seasons of 2011, the soundtrack playing in my memory will be the lovely, compelling tunes from the brand new CD His Love Remains from Collin Raye. Unlike many of you, I've actually never heard of Collin before this CD came to my attention -- it was recommended multiple times by my Facebook friends before I finally paused, clicked on a link, and fell in love with this timeless treasure. I've been playing it non-stop since I discovered it, and it's seen me through a lot of ups and downs in the past week.

His Love Remains is not a holiday CD, but it does include the perennial favorite Joyful, Joyful We Adore Thee, which truly deserves to be played all year long anyway! The fourteen other songs on the CD include a few time-honored treasures, Come Thou Font of Every Blessing, How Great Thou Art, and I Am the Bread of Life. For me, the high point of the CD and my personal favorite is Collin's duet of O Lord, I Am Not Worthy, sung so sweetly in a duet with one of my favorite singers, Marie Bellet. Collin's duets with Andrea Thomas are two more gems on a CD that is filled with highlights.

His Love Remains has a backstory, and I'll share that below in a press release that comes from my friend Joe Condit of CMG Booking. If you're looking for a gift that will keep giving all year, or a treat that will boost your own spirit this Advent, look no further than  His Love Remains.  As for me, I'm singing along non-stop, so I'll be ready when Collin calls me to sing backup at his next concert! Enjoy!

His Love Remains is an exceptional work by Collin Raye, one of the most beautiful country music voices of our generation. As Nashville Christian recording artist Marie Bellet said – "Collin Raye has a beautiful voice of pure sincerity that reaches straight to heaven". This cd introduces two original new songs by Collin, a remake of his top 10 hit Love Remains and some of the most loved Christian hymns and ballads of all time.

Collin became an American country music superstar, selling more than 7 Million records, while charting 16 #1 hits in the 1990’s. He was nominated five times for country music’s Male Vocalist of the Year Award. His new release, His Love Remains, captures for the first time the source of his rock-solid personal inner strength which carried him through it all during many trials of personal suffering. “My Faith is the most important thing in my life,” says Collin. “I can’t tell you how excited I am to record a Spiritual-Inspirational CD. It is my hope that praising God with my voice might bring people closer to God and Heaven, and in some cases - bring people BACK TO GOD." Collin hits the mark with 12 traditional hymns including "Ave Maria," "Here I am Lord," "I am the Bread of Life," "How Great Thou Art," "Come Thou Font of Every Blessing," "Give Me Jesus," and "O Lord I am Not Worthy" (a duet with Marie Bellet) to name just some. Two new Collin Raye songs sure to inspire, "Undefeated," and "I Get What I Need" also grace this incredible production. This inspirational CD is a perfect Christmas gift, but keep one for your family!

In 2010, Collin lost his precious granddaughter Haley, who died from a rare neurological disease. “I understand the cross, and I have experienced His Joy,” says Raye. “This CD tells my story.”