What the Wise Men Whisper

I was a cantor at our elementary school Mass on Thursday and I’m still humming the tune to “We Three Kings.” On the way out of the sanctuary, I found a visual to help bring remnants of that song to you. 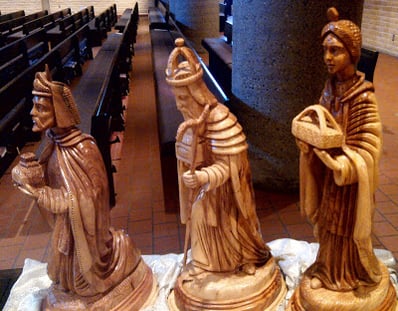 Aren’t these beautiful? I love how the closer these guys get to Jesus, the further to the ground they go. The sight of this King of Kings, an innocent babe, must have been something else. So much so that they were brought to their knees in admiration and adoration.

I can’t help but think of all the preparations that were made. What compelled them to take leave of the everyday of their lives and go on this life-changing journey? What sort of provisions did they have to consider? How long were they gone and did anyone get left behind? The promise of what might be ahead must have been a very strong pull.

It’s the weekend of Epiphany, when we celebrate that journey and what it meant. Each year, I get something different out of it. This year I keep thinking about the fact that, according to some traditional thought, these men were scientists, perhaps astronomers. I love this theory because it symbolizes to me how religion and science can work in harmony; how it doesn’t have to be one or the other.

Indeed, the world of religion can accommodate science, whereas the reverse is not true; science cannot move into the realm of the supernatural. It has limits that the supernatural does not. It’s also less expansive, though very important in providing information to us about the natural world, and giving hints of supernatural in the process.

We want things tidy, don’t we? So often, we put ourselves and others in boxes and call it good. Life is messy, though, and we are much more complex than the boxes we either put ourselves in or allow others to encase us in.

One of my most recent reads has been Bonhoeffer by Eric Metaxas. In an early chapter of the book, Metaxas is describing the family in which Dietrich Bonhoeffer, a World War II martyr, grew up. I love this:

“The family seemed to have the best of what we today might think of as conservative and liberal values, of traditional and progressive ones.” He goes on to say that a family friend who’d known Dietrich’s mother from early on said that, without a doubt, she “ruled the house, its spirit and its affairs,” but at the same time, would never have done anything against the father’s wishes. “According to Kierkegaard,” this friend concluded, “man belongs either to the moral or the artistic type. He did not know this house which formed a harmony of both.” (Emphasis mine.)

I feel like I, too, am a harmony of the moral and artistic together. And why not? Why can’t I have convictions and also be free-spirited? Is it possible that never the twain shall meet just isn’t true?

Can the Magi have been both scientists and people attracted to faith? I would say it’s very likely this was the case. I recall with fondness the 2006 The Nativity Story movie, particularly the scenes involving the Magi. They definitely stole the show with their varied personalities and adventurous spirits. But they were also depicted as scientists.

What the Wise Men have whispered to me this Epiphany is that there is room for both religion and science, both moral and artistic. These were never meant to be separated out. All are called to come and worship God and to bring the gifts — the talents — given by God to show appreciation for the gift of Him. 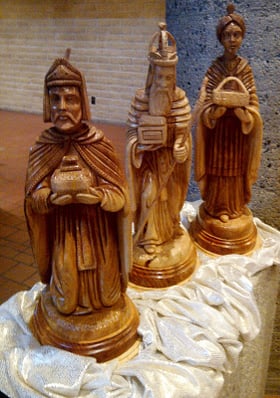 Q4U: What are the Three Wise Men whispering to you?