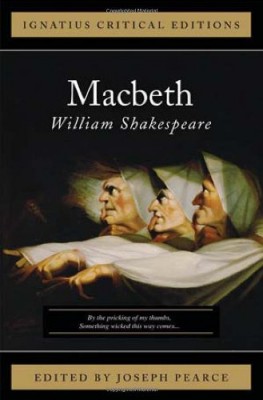 For Christmas this year, my darling husband gave me a copy of Macbeth by Ignatius Critical Editions, edited by Ave Maria’s Joseph Pearce.  Having so loved Ignatius’s Merchant of Venice and its reading of the play through the lens of our Judeo-Christian tradition, I knew I’d love this just as much.  And after a few intense nights of reading, I must say that it even exceeded my expectations.  Macbeth was truly a joy to read in all its ghoulishness.

The tale of Macbeth tells the story of the war hero Macbeth who just after securing a key victory for his country is approached by three witches who foretell that he will become King of Scotland.  His friend, the most upright Banquo, is quick to denounce the sisters and their witchcraft, but our hero, captivated by their prophesy, is not.  He dwells on their message and as other parts of their fortune begin to come true, Macbeth shares this strange event with his wife Lady Macbeth, who quickly understands that foul play is undoubtedly Macbeth’s only chance of realizing this fortune.  Lady Macbeth encourages her husband to kill their friend King Duncan, and he finally agrees to do so.  After the deed, the Macbeths slowly disintegrate; Lady Macbeth by her guilt and Macbeth by his death of conscience and paranoia, as he continues to slaughter all who stand as a threat to him and his ill-gotten crown.  Needless to say, they both come to a wretched end.

I’m grateful that my little ones can’t read yet, lest they were to wonder why their mother was sitting in the corner smiling, holding a copy of Macbeth.  But it was just so good.  And Ignatius’s generous footnotes greatly aided in my understanding of the text, mercifully assuming that I would not otherwise have known what a hautboy[1] was or that a sewer was a butler.

What also helped immensely in my understanding of the play was Professor Pearce’s grand introduction and the essays that were to follow the play.  Besides laying out the time and place in which Shakespeare wrote his play, the pieces highlight what one author calls “conveniently overlooked themes” by modern critics.  Below are a few:

-Personal freedom can only exist in obedience to natural law.

We see the Macbeths become increasingly entrapped in themselves once they break from natural law.  After the murder of King Duncan, Lady Macbeth is haunted by the sight of her bloody hands, and Macbeth feels free only to slay any additional opponents, as he, too, is visited by bloody spectres.

In his introduction, Professor Pearce cites G.K. Chesterton who writes, “Make a morbid decision and you will only become more morbid; do a lawless thing and you will only get into an atmosphere much more suffocating than that of law.  Indeed, it is a mistake to speak of a man as “breaking out”.  The lawless man never breaks out; he breaks in.  He smashes a door and finds himself in another room, he smashes a wall and finds himself in a yet smaller one.  The more he shatters the more his habitation shrinks.  Where he ends you may read in the end of Macbeth.”

Professor Pearce continues, “For us moderns, therefore, the first philosophical significance of the play is this: that our life is one thing and that our lawless acts limit us; every time we break a law we make a limitation.  In some strange way hidden in the deeps of human psychology, if we build our palace on some unknown wrong it turns very slowly into our prison.  Macbeth at the end of the play is not merely a wild beast; he is a caged wild beast.”

-Evil is the perversion of good.

What was so clear to Shakespeare and seems lost on us in modernity is that evil is the perversion of the good.  The play opens with the weird sisters chanting, “Fair is foul, and foul is fair.”  It’s this moral equivocation that ensnares Macbeth as he eschews his friend’s Christian warning of witchcraft and takes to heart their prophesy. “Stay, you imperfect speakers, tell me more” (I.3.69-70).  Professor Pearce writes that Shakespeare wrote against the moral equivocation of his time, especially regarding terrorism in the name of religion, and it’s hard not to think of our modern day ills being passed off as goods, by name: “choice”, “marriage equality”, and “separation of church and state”.

-The desire to control the future leads to a war on children.

As Macbeth becomes obsessed with killing all those who stand as a threat to his kingdom, he goes after his opponents, as well as their children.  Lady Macbeth, to show her cut-throat dedication to the unrighteous cause of the usurpation of the crown, says that she would even kill her infant son if she had to. “What beast was’t then/ That made you break this enterprise to me? / When you durst do it, then you were a man…I have given suck, and know/ How tender ‘tis to love the babe that milks me--/ I would, while it was smiling in my face,/ Have pluck’d my nipple from his boneless gums,/ And dash’d the brains out, had I so sworn/ As you have done to this” (I.7.48-59).

James Bemis of the California Political Review, author of “Macbeth on Film” writes, “Another of the play’s conveniently overlooked themes is that the Macbeths’ pride—which fuels their ambition—leads them to try to control the future.  To control the future, they must annihilate it by killing anyone who poses a threat to their comfort and well-being.  As Macbeth says, “To be thus is nothing,/ But to be safely thus” (3.1.47-48).

“This is why bloody children appear everywhere in the play: in the Macbeths’ poetry, in dreams, in visions, in the attempt on Fleance, and in the horrifying slaughter of Macduff’s children.  As literary critic Cleanth Brooks notes in The Well Wrought Urn, the babe “turns out to be…perhaps the most powerful symbol in the tragedy”.  This war on children is a war on God’s providence and is a sin that hits very close to home for many in the modern world.  Few Shakespearean scholars comment these days on this obvious motif running throughout the play.”