Do You Reject Dates Based on Family Background? 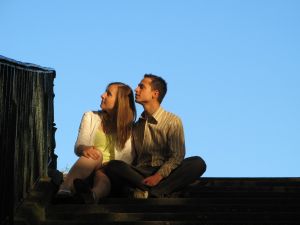 Editor’s Note: I thank Amy Bonaccorso, author of the wonderful book How to Get to “I Do” – A Dating Guide for Catholic Women, for sharing this fantastic article with our readers. LMH

The Christmas season brought an influx of articles and posts about family.  Normally, "family" is one of those words that evokes that warm, toasty feeling.  When dating, family can cause much anxiety though.

Not only do people assess individuals as spousal material based on their own merits, but they also critique their family background.  My observation is that Catholics can be especially ruthless about placing people on genealogical totem poles.

Daters can be like meatpackers with a label gun.  Divorced parents?  Reject!  The "damaged goods" label gets slapped onto the person.  Other times, it's a cruel scale exercise.  Married parents?  One coin on this side of the scale.  Functional siblings?  Two more coins.  One bad story?  Immediately subtract one coin and put it on the other side.

I understand how this can occur because unfortunately, I once engaged in pedigree analysis too!  You don't just marry a person, you marry into a family, and want to look before you leap.  As an observant Catholic, even the most botched union can be difficult to escape.  Looking at a person's family background can be seen as an additional insurance policy and predictor of the future.

It is true that people are, at least partially, the product of their backgrounds, and everyone prefers to have a positive relationship with their in-laws.  Statistics say that children of in-tact marriages have a better chance at keeping their own marriage together.  They've watched two people work things out and probably have better conflict resolution skills as a result.  They may not have as much fear attached to the prospect of getting married and starting a family either.  At the same time, so many parents are divorced today that it is hard to know how each individual child has coped with it.

And that's the point.  How can you really know how someone has coped with their family "stuff" until you get to know them?  What makes us so dismissive of free will and deterministic when confronted with family dysfunction?

The reality is that family problems can play an important role in your girlfriend or boyfriend’s pain-filled menagerie of issues.  For instance, I dated a child of divorce who still had so much anger against his mother that subsequent relationships with women suffered as a result.  I’d suggest that it wasn’t his family situation that was absolutely insurmountable though, but rather his inability to cope with it and grow beyond his childhood scars.  Disappointing as it was, I had to move on.

At the same time, I am sure we've all met children of abuse and all manner of chaos who surprise us by having their emotional equipment and lives in order.  They've done their homework and can maintain healthy relationships as a result.

That said, what about the children of in-tact, seemingly harmonious families who still somehow have mega-issues?  Are you going to let them slide through because their family status allowed them to escape the label gun?

The bottom line is that if we are Christian, we should have some respect and admiration for how Christ conducted himself.  Jesus was not someone who turned people away because "Oh, your parents had major issues."  Or, "Your sibling is nuts."  I think his behavior shows that these surface things are not a reliable way of determining what is in someone's heart of hearts.  Give people a chance.