It’s one thing to discover, from experiences over the course of your life, what’s really important when it comes right down to it. But another altogether to hear your child stand up for her convictions in public.

I’ve never been so proud of my firstborn daughter as last week when she verbally presented an essay that had been part of a grouping of finalists in a contest among parochial schools in our area. The contest was sponsored by a local pro-life organization and included several winners from each of the three schools.

My daughter was one of two from her middle-school who made the cut. They presented to a group of peers, including high-school students, along with teachers, parents and some of the folks from the organization.

Two videos were shown to highlight the importance of life; both were beautifully done and evoked my emotion on the subject. But my most powerful feelings came through when our daughter approached the podium and calmly read her essay.

Think of it: you’re a teen, you’re in front of your peers and you’re reading something you consider fairly personal before a microphone on a stage. This is no easy task, and at least one of the gals who read looked like she might faint. Another passed on the opportunity entirely due to nerves.

I don’t blame them. Public speaking is among the biggest fears that we have as a society. Which is why it was such a triumph for my daughter. I coached her a little the night before. I told her all the things that helped me when I was in similar situations in the past, and even now when I have to go before a crowd. She wasn’t convinced it would work.

So, I can’t take the credit. I’d say it was grace more than anything I might have done. Still, I was relieved for her that everything came together at the right moment.

And here’s what else I came away with: it felt big. It felt like the beginning of something. We may not know for years just what that thing may be, but I’m fairly certain I will look back on that day at some point in the future and say, “Yep, that’s when it all started.”

Finalists were honored with a rose… 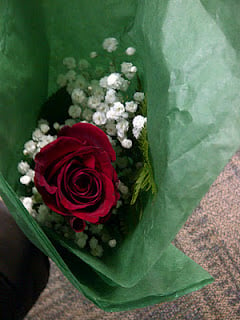 A figurine of a child in utero… 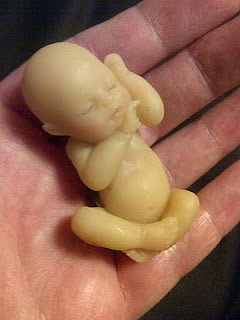 Here’s the speech as viewed from my phone’s video camera. In case that’s too hard to discern, here are the words to the speech:

“America is Becoming More Pro-Life. What are Some Reasons for This?”

“A person’s a person no matter how small.” The famous quote by Dr. Seuss runs through my mind whenever I go to pray at the abortion mill in Fargo. I wonder if he knew how prophetic his words would become on the topic of pro-life versus pro-choice. Luckily, America is becoming more pro-life each day!

I will explain to you the two main reasons why I believe that’s coming true. Firstly, the effect of the testimonies of the post-abortive women, and how they’ve touched the hearts of others. Secondly, thanks to science and new technology like the fetal-monitor, people can observe what really takes place during an abortion.

Being told abortion is wrong by someone who has never experienced it isn’t as powerful as hearing it from someone who has gone through the trauma. The leap of faith the women have when they talk about devastating low self-esteem issues, along with the heart break they face when they realize they’ve killed their own child, and anything in between, is so touching that those who hear them often have a conversion.

Science is developing greatly, thanks to inventions like the fetal monitor; mothers are able to hear their baby’s heartbeat, and see their child move before they can even feel it, creating in instant bond between the two. America interprets this as love, and life, realizing that when the baby backs up in the womb, and tries to save its life, it’s for a purpose. In turn, America’s able to see that we need to be defenders of life, no matter how small that life may be.

God is using technology and time to reveal the truth of this tragic solution. I’m hopeful I’ll be able to see the day when abortion is no longer legal and desired in America. 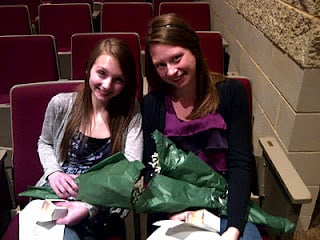 Q4U: When did you glimpse the start of something big, and know it?

A Mother and Daughter Look at a New Mother-Daughter Journal
Read
Book Review: A Daughter’s Love: Thomas More and His Dearest Meg
Read
Are We Daughters of Eve or Daughters of Mary?
Read