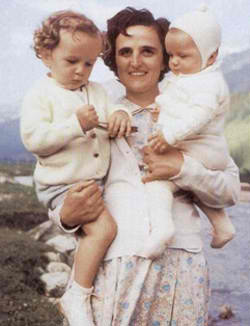 We recently passed the 39th anniversary of Roe V Wade On January 22, when abortion became legalized in the US. The amount of lives lost since then is staggering.  As a mom and Infant Teacher who works with babies all day long, I can’t imagine life without any one of these little gifts from Heaven.

One of my modern heroes of the day is Saint Gianna Beretta Molla. Saint Gianna was a wife, mother and physician. When she was pregnant with her fourth child, Gianna Emanuela Molla, serious complications arose. When doctors recommended an abortion as a possible solution to St. Gianna’s medical problems, St. Gianna adamantly refused.

She went on with her pregnancy and even gave strict instructions to her husband, "If you have to decide between me and the child, do not hesitate; I demand it, the child, save it."

St. Gianna died several days later at the age of 39 from complications of the delivery.  Her daughter, Gianna Emanuela Molla, is now fully grown and following in her mother’s footsteps as a physician.

While Saint Gianna never got a chance to see her daughter grow up, she certainly left her with a great life lesson.  Saint Gianna is a true “Catholic Mom.”

Jesus, I promise You to submit myself to all that You permit to befall me,
make me only know Your will.

My most sweet Jesus, infinitely merciful God, most tender Father of souls, and in a particular way of the most weak, most miserable, most infirm which You carry with special tenderness between Your divine arms, I come to You to ask You, through the love and merits of Your Sacred Heart, the grace to comprehend and to do always Your holy will, the grace to confide in You, the grace to rest securely through time and eternity in Your loving divine arms.