Help "All That Remains" Become a Film that Spreads Faith 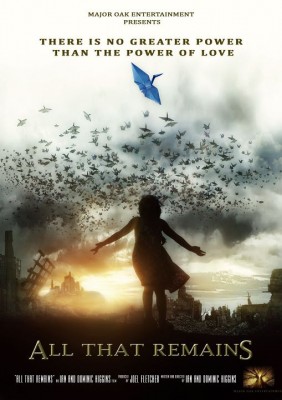 I'm happy to share the following information from Joel Fletcher, the co-Producer of the new movie All That Remains, which is currently in production. The film is directed by Dominic and Ian Higgins who also directed "Finding Fatima" which garnered high praise and followed on the heals of the wonderful "The 13th Day". Now this team is back to work, but they need our help to tell the amazing story of Dr. Takashi Nagai and his quest for the truth following the atomic bombing of Nagasaki. Please consider a donation of any size to help fund this film project and please keep their work in your prayers.

All That Remains will be a powerful docu-drama telling the remarkable story of Dr. Takashi Nagai, a survivor of the atomic bombing of Nagasaki, Christian convert and dedicated peace activist. His story is a dramatic and inspiring testament to the power of faith in the most extreme of circumstances. Indeed, many have petitioned that he be made a saint, and now it seems Dr. Nagai may soon be declared “blessed” by the church, which is the first step to sainthood.

Takashi Nagai was a Japanese doctor and sceptical man of science whose passion for the pursuit of truth led him to undertake a dramatic conversion to Christianity at a time when Western religious beliefs were especially discouraged in Japan. On the 9th of August 1945, he found himself amongst the survivors of the atomic bombing of Nagasaki, where this newfound faith was to be tested in the most extreme of circumstances.

With his beloved wife one of the 70,000 killed instantly, he was left with no choice but to fulfil his duty as a doctor, tending to the multitude of wounded and dying all around him, while struggling to make sense of his own loss and the responsibility he now faced for his two children.

He would dedicate the rest of his short life to promoting world peace through his work as a writer. His first book was “The Bells Of Nagasaki”, it went on to become a bestseller though out Japan, as a nation, defeated and demoralised by war, re-discovered through his words, the healing of power of love.

Dr. Takashi Nagai died in May, 1951 of Leukaemia brought on by prolonged exposure to radiation. He left behind two children, a 10 year old son, Makoto and a 5 year old daughter, Kayano. But he also left behind a huge collection of books, articles and personal notes, addressed to his children and to God. Through these words, the spirit of Takashi Nagai continues to live, but sadly, his story is fast fading into the obscurity of forgotten history.